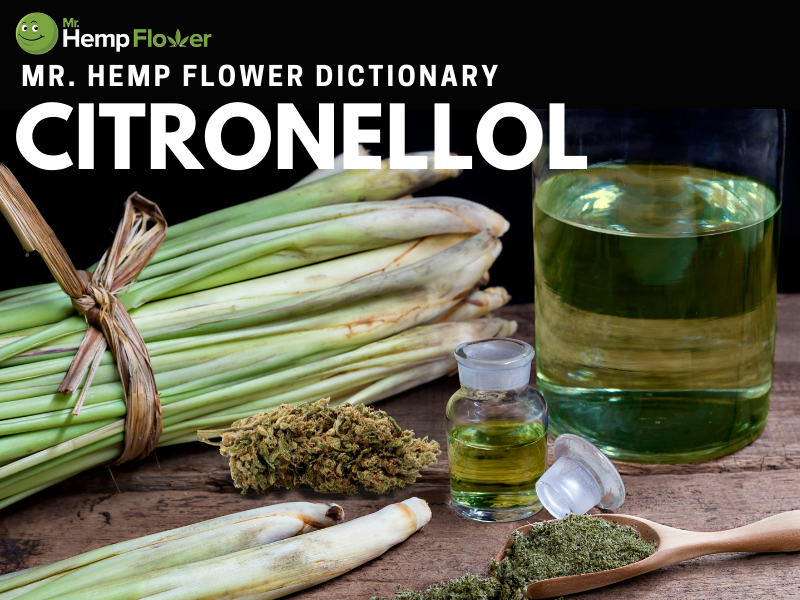 An extremely potent monoterpenoid found in roses and the stems and leaves of the lemongrass plant. This terpene is an ingredient in many botanical oils and CBD products. Characterized by a fresh floral and sweet citrusy aroma, it’s an effective mosquito repellent used in perfume and beauty products. Its effects are not well-investigated in humans, but we know of its potential anti-inflammatory and pain-relieving properties. It also demonstrates potential as a blood pressure reducing agent.

“Did you know that the smell of roses partly comes from citronellol, a terpene also contained in cannabis?”

Also known as dihydroeugenol, this terpene is an organic compound occurring in citronella oil. The citronella oil is an essential oil derived from the leaves and stems of the lemongrass plant. This oil has two main chemotypes, Ceylon and Java, originating in Sri Lanka. The essential oil containing citronellol comes primarily from Asia, with up to 40% of the global supply coming from China and Indonesia. It’s also naturally present in the oils of geranium, chamomile, catnip, and sandalwood.

If you’ve ever used or been around mosquito repellents, you’ve encountered citronellol. This terpene is a common ingredient in repellents in the form of candles, sprays, and diffusers. The EPA classified it as a minimum risk pesticide.

Due to its floral and fresh citrus notes, this terpene is a popular scent-enhancing ingredient. It’s widely used in perfumes and skin-care products like body lotions, deodorant soaps, and after-shave balms. If any of the skin-care products you’re using contain the term “citrus-scented” on the label, their smell might come from citronellol. Another use of citronellol is in aromatherapy, meditation, and ceremonies through an incense made with citronella oil.

If you want to sniff some citronellol in its natural form, stop and smell the roses. As a component of rose oil, this terpene — together with geraniol and β-damascenone — make up the recognizable rose scent. It exhibits a fresh, floral-citrus aroma that’s deceptively sweet but acts as a mosquito repellent.

According to research, citronellol displays low toxicity. The FDA granted this terpene the status of a Generally Recognized as Safe (GRAS) substance that can be used as a food additive for human consumption. Using citronellol in cosmetics is a controversial topic because it may act as a skin allergen. The oil of citronella may act as a mild irritant to the skin and eyes. Companies registered in Europe must declare the use of this terpene as an ingredient in their skin products.

Pain and inflammation often go hand in hand, and like most components, this terpene may provide pain relief by reducing inflammation. One animal study found that citronellol displays anti-inflammatory activity through different mechanisms and acts as an effective analgesic. Its pain-relieving effects may come from its strong antioxidant properties. Several other animal studies found that citronellol attenuates pain and exhibits anti-inflammatory activities.

This terpene has potential effects on the cardiovascular system by inhibiting the contraction of smooth muscle cells. By directly affecting the vascular smooth muscle, citronellol lowers blood pressure in animals.

It’s mostly present in cannabis strains like Island Sweet Skunk and Great White Shark. In cannabis, it features a lemony citrus scent with a flavor that may be perceived as passionfruit, geranium, or honey. This terpene is widely incorporated in hemp CBD oils, tinctures, and similar products.

With a sweet and flowery scent, citronellol is used as an insect repellent in aromatherapy and food.