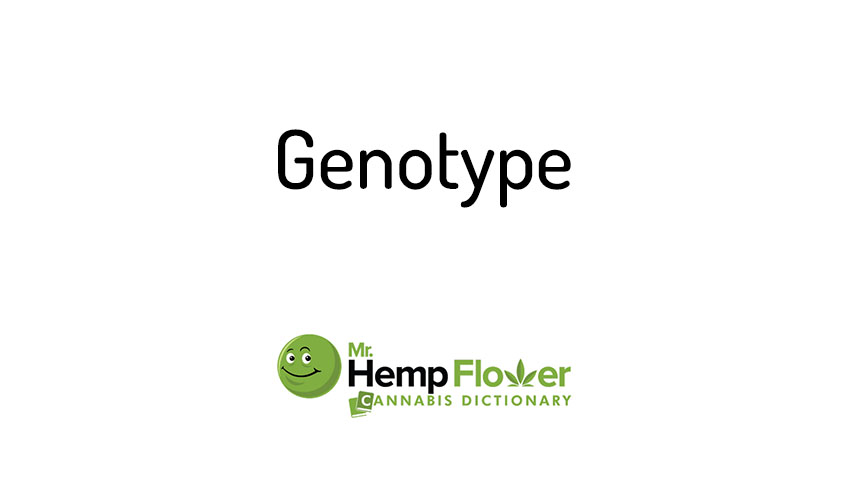 The genetic code that a hemp plant inherits from its predecessors. This genetic makeup determines the plant’s growth, appearance (color, height), resistance to disease, and general ability to produce resins. The genotype of a plant is key to understanding the genetic potential of a cultivar, plus how different environmental conditions may influence its growth and physical appearance.

“Knowing the difference between a plant’s genotype and phenotype allows growers to understand why plants with similar genetics develop in different ways — even within the same crop.”

“I planted hemp seeds harvested from the same mother because they have a similar genotype.”

Before a plant starts to sprout, its seed contains the genetic code or information that determines the spectrum of potential visual, physical, and growth characteristics. The full set of genetic markers within the cultivar’s DNA is called a genome. Not all DNA influences the plant’s growth traits. But, all the DNA that translates into proteins will constitute a plant’s genome.

The genotype is linked to genetics and inherited traits and represents a range of possibilities a plant can exhibit. For example, two different hemp plants of the same cultivar (or cultivated variety) won’t have completely identical traits but share similar genotypes inherited from the same mother plant. A cultivar is a plant variety produced in cultivation by selective breeding. Shortly put, humans selected and improved a line of plants that carry common, unique characteristics.

No two hemp plants have the exact same genome — only clones contain the exact copies of the original genome. Genetics doesn’t determine the plant’s final characteristics because the environment has a massive role in its development. This leads to the question of the differences between genotypes and phenotypes.

If a genotype is a genetic code that determines the growth, appearance, and other characteristics of the plant:

How do hemp plants with the same genotype exhibit different physical characteristics?

That’s because the plant’s development is affected by the environment where it grows. The interaction between genetics and the environment results in a plant’s phenotype. Here’s a scientific formula for a clearer explanation:

A hemp phenotype consists of the visible characteristics or traits of a plant. These observable traits determine whether a plant will end up within its spectrum of genetic traits defined by the genome. Genotype is an internal genetic code, while phenotype is an external expression of the intrinsic process influenced by environmental factors. Elements of a plant’s phenotype are:

Only clones have an identical genotype but differ in their phenotype. If growers plant clones of the same genotype and cultivate them in different growing environments, the grow setups, climates, and growth mediums will alter the height, color, shape, strength, and yield of each plant — resulting in two separate phenotypes.

One study on hemp (Cannabis sativa L.) revealed traits nearly entirely controlled by genetics — like THC and CBD production and days to maturity. The researchers of the study also identified traits strongly influenced by the environment, like plant height, grain yield, and water use. They put an emphasis on the importance of genetic control of hemp features to advance the breeding of cultivars that adapt well to desired growing regions.

A genotype determines the initial genetic code of a plant, while a phenotype represents its perceptive traits after environmental exposure. How do we know what’s inside an individual hemp plant? The answer leads to chemotype — a term that describes the chemical characteristics (cannabinoids and terpenes) of a cultivar.

The ratio of cannabinoids, terpenes, and other phytochemicals makes up a plant’s chemotype, which is also determined by its genome. The environment does play a role in determining a hemp plant’s chemotype. But, the plant’s genes dictate the possible range of chemotypes the plant can produce under a given set of environmental conditions.

This means that two genotypes raised with the same nutrients and in the same environment will produce two different cannabinoid and terpene ratios. Unlike the phenotype, the chemotype develops much more consistently with the genotype.

All plants have a genotype, a genetic code inherited from their forerunners that determines their growth, appearance, and chemical profile.