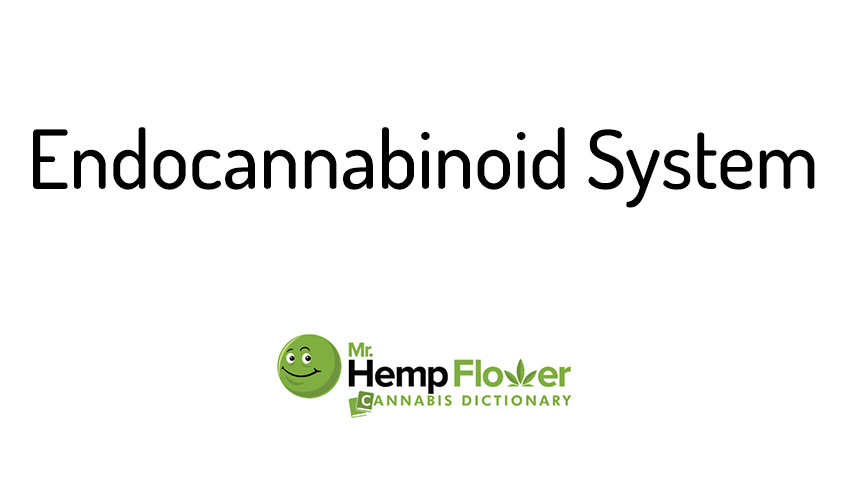 A complex cell-signaling system of cannabinoid receptors, lipids, and enzymes identified in the early 1990s by researchers exploring tetrahydrocannabinol (THC) — the intoxicating cannabis compound. The endocannabinoid system (ECS) performs a large role in maintaining homeostasis or internal regulatory balance in the body.

“Did you know that the endocannabinoid system regulates important bodily functions like sleep, appetite, and fertility?”

“The endocannabinoid system is a newly discovered complex system that helps the body return to its ideal balance.”

More About the Endocannabinoid System

Experts are still trying to develop a complete understanding of the ECS. So far, they know that all mammalian vertebrates have one and that it interacts with endocannabinoids and phytocannabinoids. This system exists and is activated in the body regardless if the person uses cannabis. It plays a role in regulating functions and processes in the body, including:

Parts of the Endocannabinoid System

The two main endocannabinoids identified by researchers are anandamide (AEA) and 2-arachidonoylglycerol (2-AG). Endocannabinoids assist in running internal functions smoothly. They are produced in the body on-demand, so it’s difficult for scientists to know the typical levels for each.

The effect an endocannabinoid produces depends on which receptor it binds to and where that receptor is located. Some molecules target the CB1 receptor in a spinal nerve to relieve pain. Others may bind to a CB2 receptor to warn the body about inflammation.

The Connection Between CBD and the ECS

This is a new theory supported by some experts and is known as clinical endocannabinoid deficiency (CECD). It suggests that low endocannabinoid levels in the body can lead to certain conditions — typically conditions that don’t have a clear underlying cause.

An article published in 2016 suggested the theory that CECD may explain why some people develop fibromyalgia, migraine, and irritable bowel syndrome. All of these conditions are resistant to treatment and oftentimes co-occur. If this theory proves correct, targeting the ECS may be essential to treating these conditions, but more research is needed.

The ECS is a complex system of receptors that plays a big role in keeping internal processes stable.