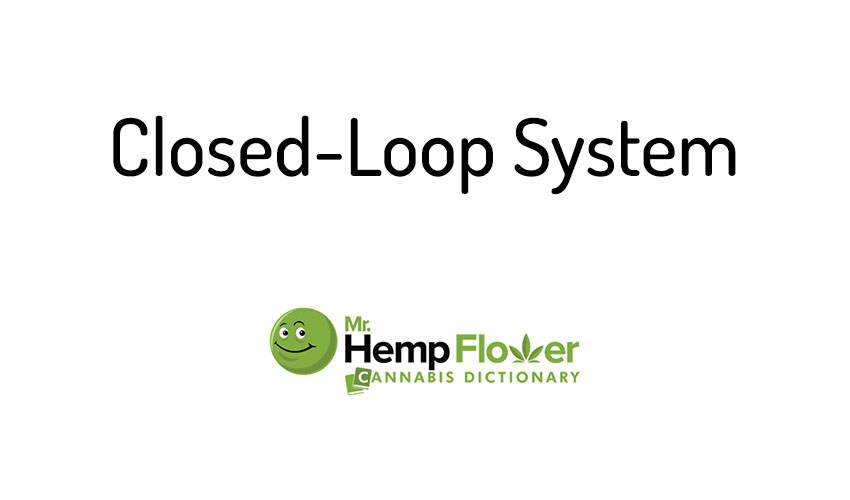 This term describes the equipment and process manufacturers use to extract the active compounds from the cannabis plant using solvents — in a safe, efficient environment. As the name suggests, closed-loop refers to the “path” of the solvent during extraction. Namely, the solvent used to extract the compounds from the hemp plant doesn’t come into contact with the outer environment at any point during extraction. On top of that, the solvent makes a full loop on its phase change from liquid to gas and liquid again. The solvent makes a full circle, starting and finishing in the same space.

“Did you know that a closed-loop system refers to the way the solvent “travels” during cannabis extraction?”

“The CBD oil I use is made with CO2 extraction in a closed-loop system.”

The structure of these systems vary mechanically, depending on the solvent used, but the general method remains the same. The three main containment areas are:

The main purpose of this method of extraction is to strip off all the precious compounds from the hemp plant. Therefore, depending on the type of solvent used (butane, carbon dioxide (CO2), etc.), the solvent may need to pass through the hemp material multiple times until cannabinoids and terpenes are completely drained from it.

Butane is one of the top solvents that can extract almost all of the essential properties in one loop through the system. That’s not the case with CO2, which is more selective and will take several runs and several more hours than butane to fully capture the therapeutic properties of the cannabis plant.

At the beginning of the process, manufacturers fill a tank of liquid solvent or gas that’s mechanically converted into a liquid solvent. The solvent then flows into the tank with the hemp buds or trim, dissolving the plant’s active compounds and creating a solution. The final tank starts filling with the extract, and the use of heat makes the initial solvent evaporate from the solution. When the solvent evaporates into a gas, it’s condensed back into the first tank, where it can be reused on the same hemp flower batch or a fresh batch.

The Risks of Using Closed-Loop System

One of the biggest risks of this system is the hazards and precautions of using a solvent. Each solvent has its own precautions the manufacturer needs to take into account when using it. Some solvents are flammable, others are asphyxiants. Some solvents operate at high pressures and others at low pressure. Bottom line, each is different and requires different engineering controls to ensure all hazards are mitigated during extraction.

As a solvent, butane gained a bad reputation in the media due to explosions from “open blasting” — it happens when the solvent is exposed to air during extraction. Aside from this, butane is rated as “generally Regarded As Safe” by the FDA. This means that it’s flammable, but when used properly, like within the closed-loop system, it’s one of the safest liquified gasses to store and use indoors and outdoors. Open blasting, on the other hand, is a dangerous alternative to the closed-loop system.

CO2 is not flammable, but it’s an asphyxiant — a nontoxic or minimally toxic gas that displaces or reduces normal oxygen concentrations in breathing air. This gas requires an extremely high pressure to convert it into a supercritical fluid form capable of extracting hemp compounds. During extraction, the concentration of CO2 in the air is being monitored to ensure worker’s safety throughout the entire process. Regardless of the solvent used, engineers take safety measures, including placing sensors to detect even trace amounts of gas.

A closed-loop system refers to the process (and equipment) of hemp flower extraction using a solvent. This system doesn’t allow the solvent to get exposed to the external environment as it makes a full loop through the chambers until all cannabinoids and terpenes are fully extracted.