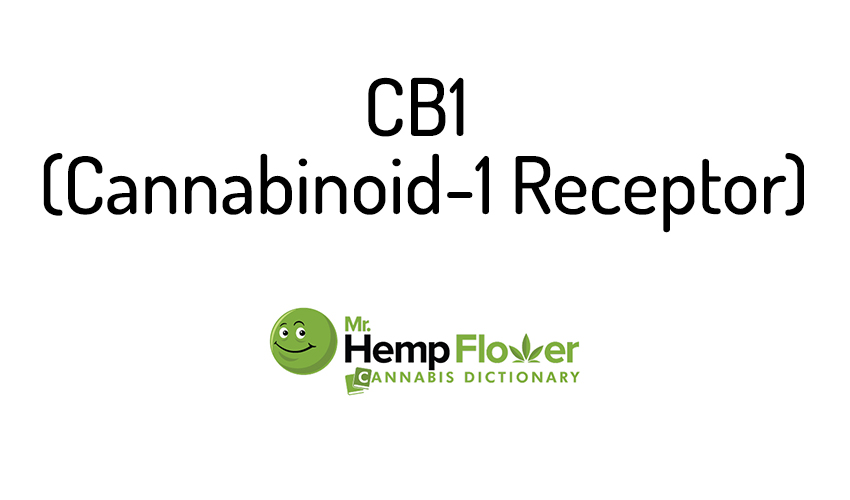 An essential protein that’s part of the body’s endocannabinoid system (ECS). The cannabinoid-1 receptor is targeted mainly by delta-9 tetrahydrocannabinol (THC), the main intoxicating cannabis compound. Research shows that THC is an agonist or activator of this receptor. This means that THC must bind to this receptor — that’s primarily located in the brain — for a person to feel its intoxicating effects.

“Did you know that THC binds to the CB1 receptors in the brain to get you high?”

“Learning about the endocannabinoid system (ECS) and its receptors, CB1 and CB2, have been a fascinating process.”

Cannabinoid receptors are a vital component of the body’s endogenous cannabinoid system or endocannabinoid system. All functions in our body are connected and require balance (homeostasis) to perform at maximum capacity. To achieve that balance, the ECS system uses three main components, including:

Because the CB1 receptors are targeted by tetrahydrocannabinol and play a major role in the euphoric effects of cannabis, they are often thought of as THC receptors.

In the human body, the CNR1 gene produces the CB1 protein. The “blueprints” on how to build this protein reside in the DNA. Due to random or inherited mutations in these blueprints, people carry different versions of the CNR1 gene. Such potential mutations may be one of the reasons people react differently to hemp cannabinoids like THC and CBD.

Also, when a person uses cannabis repeatedly, the body creates tolerance, expressed in decrease in CB1 expression throughout the brain. Abstinence from cannabis (even as short as 48 hours) can resensitize the system and reset the expression of CB1 proteins to their initial level that’s equal to one of the non-cannabis users.

The Structure of CB1 Proteins

These receptors are G protein-coupled receptors (GPCR), a large and diverse group of cell membrane receptors. Out of all GPCRs in the entire nervous system, the CB1 are the most widely expressed. They’re present in all areas of the brain in every neuron type.

These receptors stretch across the membrane or wall of a cell with its binding side facing outward — like a lock waiting for its key. So, when endogenous cannabinoids or phytocannabinoids find active CB1 receptors, they unlock them. The G-proteins located on the inside of the cell, bind to the CB1 receptor’s tail. When a molecule like THC activates the CB1 receptor, these protein molecules are released to deliver messages.

Researchers are unsure whether CB1 receptors are active or just waiting to get recycled back to the cell’s surface. Some data on these receptors reveal that they might contain a binding pocket uniquely suited to receive signals from THC. This theory may explain why THC is an agonist of this receptor and causes intoxicating effects in humans.

Aside from being a binding site for THC, these receptors can be activated by so-called allosteric modulators. These modulators are a group of substances that bind through an alternative binding site and change the receptor’s response to a stimulus. Allosteric modulation of this group of receptors may provide new opportunities for therapeutic effect without the potential side-effects of THC.

Cannabinoid-1 receptor is targeted by two primary endocannabinoids, anandamide and 2-AG. Known as “retrograde messengers,” these two molecules float backward across the gap between two neurons, in the opposite direction of other neurotransmitters. So, after they bind to the CB1 receptor, the inside cell of the receptor releases G-proteins that activate a number of other intracellular processes such as neurotransmitter release.

How Cannabinoids Affect the CB1 Receptor

One of the most notable functions of this receptor is regulating and controlling the brain’s limbic and reward circuitry. This means that the CB1 receptor influences dopamine transmission and is behind the euphoric high when triggered by THC.

Aside from enabling the euphoric effects of cannabis, CB1 is involved in the brain’s control of pain. The midbrain, or the location of the pain “headquarters,” is the main pathway of pain mitigation for this receptor. This pathway of alleviating pain is used by both cannabinoids and opioids. Since THC affects the CB1 receptors, it’s considered to have a profound alleviating effect on pain.

On the contrary, CBD doesn’t activate this receptor, so it’s considered less effective than THC in alleviating pain. However, CBD is an effective anti-inflammatory agent, a benefit that may significantly contribute to pain relief.

One of the side-effects caused by cannabis compounds is an abnormally fast heart rate, known as tachycardia. Direct activation of CB1 receptors located on cardiac cells may play a role in this condition. These receptors are common in autonomic nervous system areas responsible for involuntary life functions like breathing and heart rate. They are abundant in the medulla oblongata, the part where the tip of the spinal cord connects with the brain. This part is responsible for controlling the body’s involuntary vital functions.

These receptors are part of the endocannabinoid system, which is known to play a role in appetite and metabolism. CB1 receptors, particularly the ones located in the hypothalamus, have a big role in survival-based appetite, or the drive to eat for energy, and the “hedonic” appetite drive, or eating for pleasure. Researchers have pointed out interactions between the endocannabinoid system and the gut microbiome. This connection between the ECS and the “community” of microorganisms within the gut may plant an important role in the body’s metabolic functions.

Do Both THC And CBD Bind to CB1 Receptors?

An article published in the British Journal of Pharmacology found that tetrahydrocannabinol is a CB1 and CB2 agonist. This means that a THC molecule binds to both of these receptors and mimics the function and role of endocannabinoids. After binding, it activates receptors CB1 and CB2, hence producing its effects.

Unlike THC, cannabidiol (CBD) doesn’t have an affinity for either of these receptors. While THC is an agonist, CBD is an antagonist, which means it doesn’t activate them but counteracts some of their effects. For example, cannabidiol may inhibit the psychotropic effects produced by THC.

CBD appears to have other mechanisms of action that it uses to produce its effects in the body. Researchers assume that this cannabinoid inhibits enzymes and other receptors that affect the release of endocannabinoids and other neurotransmitters.

CB1 receptors are the most prominent receptors of the endocannabinoid system. Located in the brain and central nervous system, they play essential roles in the regulation of pain, appetite, heart rate, and psychotropic effects of cannabis.