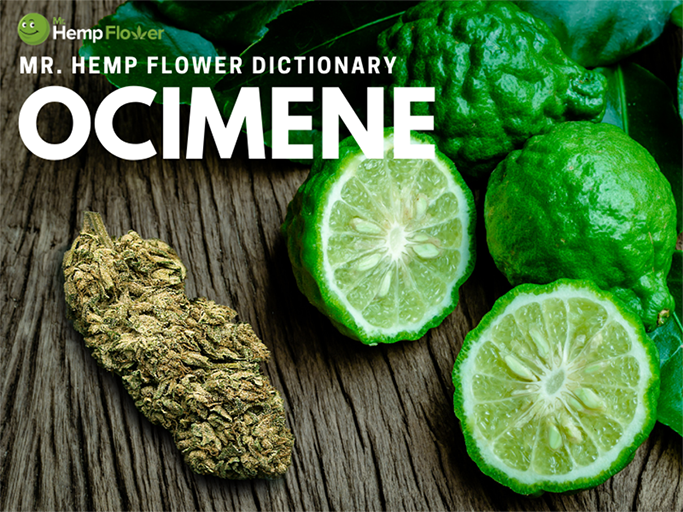 A monoterpene with a significant role in hemp — also found in plant life like mint, parsley, mangos, and kumquats. It exhibits a sweet, fragrant, woody, and herbaceous scent and is chemically similar to the terpene myrcene. Its fragrant aroma makes it a common ingredient in perfumes where it contributes to floral notes like lily and lilac. With its anti-congestant, antimicrobial, antiviral, and anti-inflammatory effects, this terpene possesses exciting therapeutic potentials.

“This hemp pre-roll has a sweet woody flavor because it’s high in ocimene terpene.”

“Did you know that ocimene is a terpene that naturally occurs in hemp and the essential oil of basil?”

Derived from the Ancient Greek word Ocimum, which means basil, ocimene occurs naturally in the essential oil of basil. This acyclic terpene and its chemical variant beta-ocimene are unstable in air and nearly insoluble in water — but soluble in organic solvents like acetone or ethanol. It has a characteristic citrusy or fruity flavor and doesn’t display a predominantly herbal essence. Like the borneol and guaiol terpenes, it has a strong, woody aroma, with more subtle nuances of lavender or metallic scent perceived by some. Insects are not fond of its fragrance, so it’s commonly present in certain insecticides.

From houseplants to cleaning products, this terpene has a number of industrial and practical uses. Most antiperspirants, shampoos, soaps, and fabric softeners with a woodsy or forest scent contain this terpene. Traces of its smell may be found in perfumes with herbal or woodland notes. If you like cooking, this terpene is a common visitor in your kitchen. You will notice its herbal undertones in every dish you prepare using pepper or parsley. Mint candy made from natural ingredients can be flavored with this terpene. The orchid flower, known for its nighttime air-purifying qualities, is another potential natural source of ocimene.

Therapeutic effects of the terpene ocimene

In recent years, researchers dabbled into the potential therapeutic effects of terpenes, and ocimene is not an exception. This terpene shows potential anti-inflammatory, antifungal, and antiviral properties, but further research in humans is needed.

A 2015 study published in the Journal of Natural Medicines investigated this terpene’s antifungal effects in a blend of components against yeasts and molds. The authors of the study concluded that this terpene, together with the other elements, may be an effective antifungal agent. Interestingly, the study revealed that ocimene might be useful against dermatophytosis — a skin fungus, also known as ringworm.

A 2013 study published in the journal Food and Chemical Toxicology studied this terpene as a compound present in the Oenanthe crocata essential oil. The authors of the study concluded that the oil exhibited strong anti-inflammatory, antioxidant, and antifungal properties. Like other studies, this one also revealed the potential of this terpene to combat ringworm. Although further research is needed, this ocimene-rich essential oil is recommended for the management of some inflammatory diseases.

A 2008 report published in Chemistry & Biodiversity analyzed the essential oils of seven Lebanese species of trees. The terpene ocimene was one of the primary constituents of the oils examined for their inhibitory effect against the herpes simplex virus and SARS-CoV. As you may know, SARS-CoV is a coronavirus that causes severe acute respiratory syndrome. The study demonstrated that the oil, which contains ocimene, shows antiviral effect against SARS-CoV. Further research is needed to determine the effects of this terpene beyond the in vitro stage.

Does ocimene make you cough?

If you’ve been a cannabis or hemp user, you may attest to the anecdotal evidence that certain hemp strains cause violent coughs after inhalation. Terpenes may play a role in it, especially ocimene. One 2016 paper published in the South African Journal of Botany investigated wild ginger’s effects as a traditional remedy for influenza, asthma, and sinus problems.

The study revealed that wild ginger’s essential oil contains eucalyptol, which may be the component guilty of its decongestant properties. The authors of the study also found that ocimene was one of the three abundant terpenes within the essential oil, which indicates that it may play a role as a decongestant and induce coughs.

As a secondary terpene, it’s present in a range of hemp flower strains, including:

Aside from its benefits and therapeutic potential, this terpene plays a significant role in the entourage effect. The entourage effect theory suggests that each hemp terpene, regardless of how minor, contributes to the synergy of hemp’s compounds. That synergy magnifies the therapeutic benefits of the individual components in the plant. That way, the medicinal impact of the hemp plant as a whole is far greater than the sum of its parts.