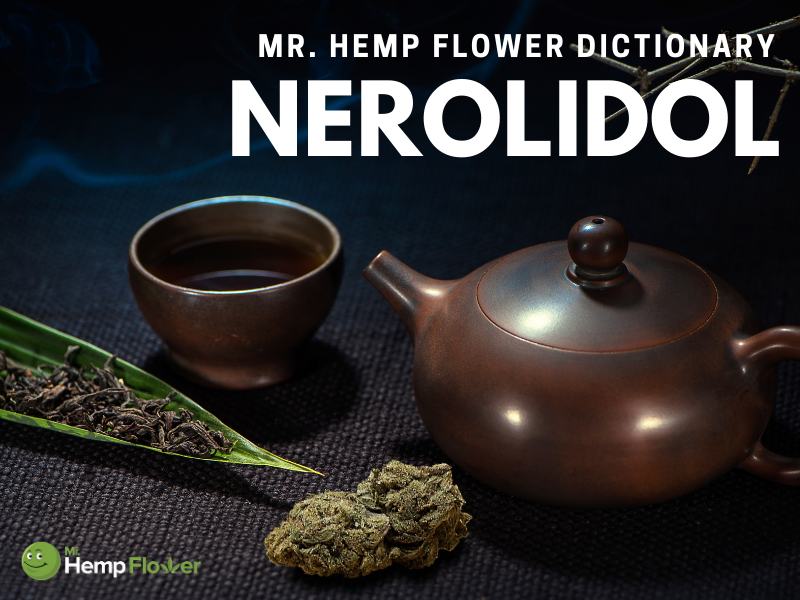 Nerolidol is a sesquiterpene present in hemp and the essential oils of various plants and flowers, including lavender and jasmine. Also known as pepruviol or penetrol, it exhibits a floral or woody aroma that reminds of fresh tree bark. This terpene possesses several therapeutic qualities, including antifungal, sedative, antibacterial, and anti-anxiety effects.

“Did you know that the terpene nerolidol is present both in hemp and lavender essential oil?”

“This Cat’s Meow hemp pre-roll has a woody aroma and taste; maybe from the nerolidol in it.”

It’s a terpene commonly found in hemp present in two different types, cis-nerolidol and trans-nerolidol. The main difference between these two types lies in the arrangement of their atoms. Nerolidol is also the primary scent compound of a species of orchid native to Mexico. Aside from its natural presence in such herbs and plants, this terpene is used as an insecticide to combat pests like spider mites, head lice, and parasites. In its organic form, it has been shown to act as a natural sleep aid because of its sedative properties.

What are the uses of nerolidol?

Due to its woody and floral notes, this terpene makes an excellent ingredient in lotions and perfumes. Essential oils like tea tree oil or orange blossom are rich in this terpene and are a popular addition to scented moisturizers or salves. It’s also a component of ginger, which you’ve probably tasted in many meals or teas. The food industry widely uses this terpene as a flavoring agent and scent compound in products like candy and chewing gum. The best way to experience this terpene’s woody aroma is in nature or a garden full of Mexican orchids.

What are the effects of nerolidol?

Researchers are studying the potential properties of this terpene and how it affects humans. So far, science shows that this terpene exhibits antifungal, antimicrobial, antioxidant, sedative, and anti-anxiety effects.

A 2007 study published in the journal Biological & Pharmaceutical Bulletin examined the effectiveness of this terpene against a skin fungus in guinea pigs. Researchers discovered that it acted as a potential antifungal agent on the guinea pigs.

discovered that, in combination with other drugs, this terpene might serve as a tool against malaria.

One 2016 study performed on mice, published in the Indian Journal of Pharmacology, revealed that this terpene might display anti-anxiety effects.

One 2013 study conducted on rodents revealed that this terpene may have sedative and antioxidant properties. The study was published in Neurochemical Research, but we need more studies to understand its ability to act as a sleep aid for humans.

One 2016 study conducted in rodents found that nerolidol possesses antioxidant properties in animals. The study, published in BMC Neuroscience, revealed that this terpene protects against oxidative stress and shows potential in treating neurological conditions like Parkinson’s.

Nerolidol and the skin

One 2007 study conducted in animals revealed that this terpene enhanced the skin penetrating effects of topical agents. The study published in the International Journal of Pharmaceutics concluded that by offering such effects on the skin, it could benefit skin lesions in animals. Further research in humans is needed.

What hemp strains are high in nerolidol?

A hemp terpene praised for its appealing, woody aroma and potential antibacterial and sedative properties.