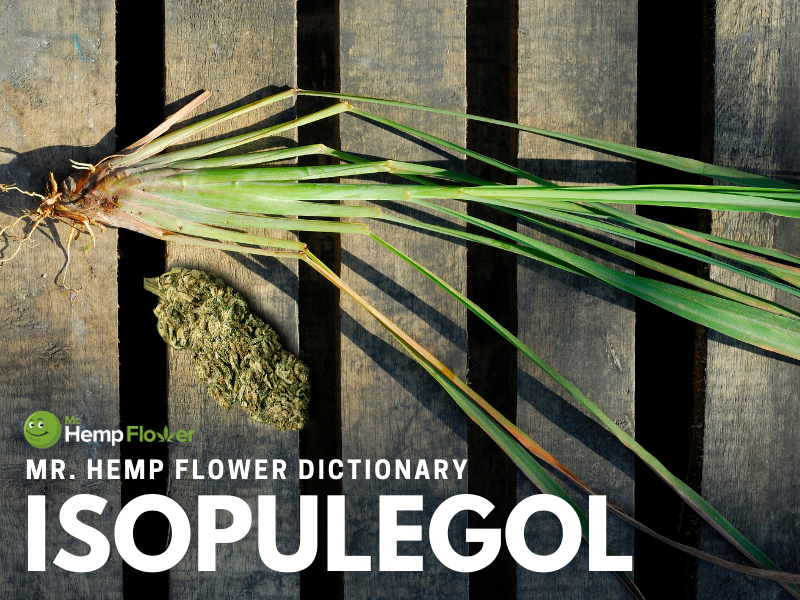 A hemp terpene praised for its distinguished and vigorous minty aroma and flavor. An interesting fact about isopulegol is that it’s the chemical precursor to menthol. Also found in lemongrass and geranium, this terpene exhibits potential anti-inflammatory, antiviral, and gastroprotective effects.

“This hemp flower pre-roll has a hint of mint; maybe it contains the terpene isopulegol.“

“Did you know that isopulegol is a terpene found in hemp and lemongrass?”

A terpene present in natural menthol that’s produced by freezing peppermint oil — an essential oil used as an herbal treatment for headaches. On a global level, India and China take the lead on menthol production, followed by Germany and the United States. Aside from its use in menthol production, this terpene naturally occurs in the flowering geranium plant found in abundance in the Mediterranean. It’s also an ingredient in lemongrass, together with citronellol and myrcene.

Its cooling, mint-like scent and flavor make it an attractive additive in cosmetics, soaps, and a range of scented personal care products. As a chemical precursor to menthol, you’ve probably tasted it in natural health and beauty products, alongside menthol and citronellol. In such products, terpenes typically appear as ingredients of plant-based essential oils.

Compared to other terpenes, isopulegol’s medicinal properties are not as well known. There is some scientific evidence of this terpene’s potential anti-inflammatory and anti-anxiety properties.

This terpene is a primary constituent in the essential oil from the leaves of lemon balm (Melissa officinalis L.) — a plant with an extended use in traditional Moroccan medicine. One 2013 study published in Advances in Pharmacological Sciences investigated this essential oil’s ability to fight inflammation. The oil contained 22% isopulegol and dramatically reduced swelling in animals. These findings suggest the potential use of this terpene for fighting inflammation.

One 2007 animal study by Brazilian researchers revealed that this terpene produces effects similar to anti-anxiety medications. However, it also found that it worsened some depression-like behaviors. Hemp is widely used as an anxiety reliever, but this terpene’s impact on humans needs further research.

A 2009 German study investigated the effects of isopulegol on gastric ulcer models in mice. Researchers concluded that it produces notable gastroprotective effects and may possess antioxidant properties.

One 2018 study tested the antiviral properties of this terpene, revealing that it could show highly effective activity against the H1N1 and H1N2 strains of the influenza virus. This activity was accentuated during the early stages of the spreading of the virus.

According to one animal study, isopulegol’s antioxidant properties may contribute to the component acting as an anticonvulsant.

You can find it in some hemp strains in trace amounts because it’s a minor terpene. You may also find it in higher concentration in broad spectrum and full spectrum hemp CBD products. The role of this terpene in hemp goes down to the power of the entourage effect. The entourage effect is a theory that suggests how the combined efforts of hemp compounds contribute to the plant’s potency to help with various conditions.