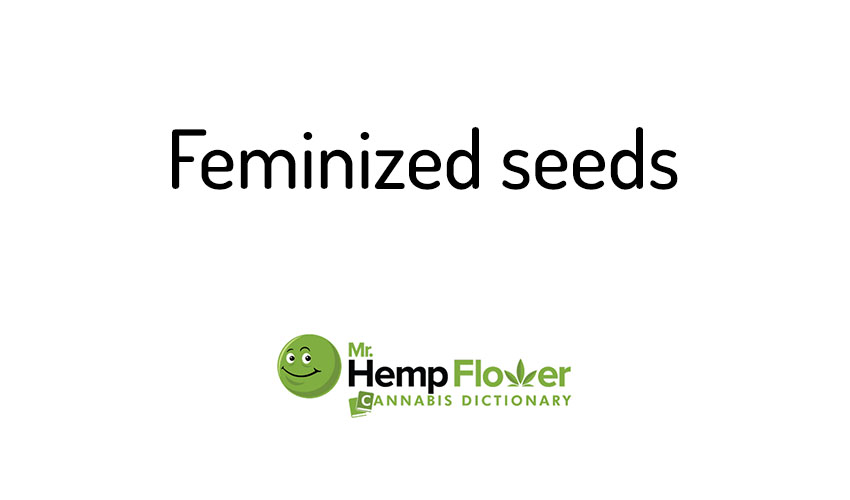 Seeds bred to produce only female hemp plants. Unlike feminized seeds, regular seeds have a 50% chance of producing male plants, which is not ideal for the grower.

“Feminized hemp seeds are bred to contain no male chromosome.”

“What’s the difference between feminized and autoflowering seeds?”

What Are Feminized Hemp Seeds?

Simply put, they are seeds that grow exclusively into female hemp plants. Feminized hemp seeds are made using specialized methods that give growers peace of mind that their seeds are “feminized” and only yield female hemp plants. These seeds are the backbone of cannabis cultivation because only female plants produce consumable flowers.

Male hemp plants produce pollen sacs instead of flowers, so having them around female plants can ruin an entire harvest. Male plants can pollinate the buds of female plants, creating a lot of seeds, which lowers their consumption quality.

Breeders and growers developed feminized cannabis seeds because of these potential challenges. They wanted to increase the likelihood that all seeds will yield only female plants. This eliminates the possibility of getting a male plant that won’t produce flowers or a male plant pollinating the female plants. Breeders have developed highly reliable feminization methods with success rates of around 99%.

Male hemp plants are useful in certain situations. One of them is when breeders need them to pollinate their females and successfully crossbreed their plants to develop new and exciting strains. But, when farming hemp for cannabidiol (CBD) oil, male hemp plants are removed from the fields because they can significantly lower the crop yield.

When a female hemp plant is pollinated, she diverts most of her energy to producing seeds. This energy is wasted on seed production when it could have been used to produce more CBD and CBG-rich resin. This is the reason why pollinated female plants produce much less cannabinoid resin. Their flowers are filled with seeds, creating an inconvenience for farmers who have to spend extra time and money to deseed them before processing.

Processors use several different ways to successfully create feminized hemp seeds. Each company that produces these seeds applies different methods, but the two most common techniques are:

Breeders and processors carefully stress female plants — typically by interrupting the plant’s life cycle — to prod the plant into producing seeds that copy the plant’s own genes. This method guarantees that the seeds will grow into female plants.

Scientists have developed a few different formulas that include silver and other (gibberellic acid) elements to trigger a gene change in seeds. They apply some of these chemicals directly to seeds, which turns female plants into male plants.

Chemicals like silver nitrate and silver thiosulfate inhibit the plant’s ethylene production — the hormone that promotes female flowering. Without the presence of this hormone, the production of female flower is reduced or stopped. When the plant’s ethylene levels are modified, the female plant changes sex and turns into a male plant — without male genes. So, when these newly transformed male plants pollinate the female, they produce only female seeds.

These hemp seeds are more expensive than regular seeds but offer farmers peace of mind. With these seeds, they don’t have to worry about a few random male hemp plants pollinating the crop and undercutting their profits.

When growers know that all of their seeds are feminized, they can better estimate their crop yield and forecast profits. This allows them to budget more efficiently. Consequently, this investment brings in higher profits. Regular hemp seeds are likely to contain a similar number of males and females. For farmers, this means they will have to eliminate roughly half of their crop, cutting their ROI in half. With feminized seeds, over 99% of the seeds that germinate grow into cannabinoid resin producers.

Regular hemp seeds take up to six weeks to reach the preflower stage. During this period, farmers can accurately sex their plants. They’ll have to take the extra time to assess every plant and cull male hemp plants.

Furthermore, culling a bunch of female plants can destroy the canopy. The canopy is a part of the plant that grows to protect them from weeds and some pests —  if planted in well-designed rows. Destroying this protective part with culling can make the remaining plants more vulnerable to invasive weeds and pests.

How to Get Feminized Seeds?

Feminized hemp seeds are mainstream. They can be purchased online from seed banks around the world or places that sell hemp seeds. Some growers try to feminize seeds on their own, but it’s better to buy them from a reputable breeder or seed bank.

Are They Guaranteed to be Female?

There is no 100% guarantee that all of them will be female, though they generally grow female plants only. Periodically, a feminized seed will still grow up to be a male hemp plant. Therefore, it’s always a good reason to keep a close eye on the plants as they start to mature. The formation of pollen sacs indicates a male plant that should be eliminated before it pollinates and ruins the females.

Are there growers who invest in regular seeds? The answer is yes, there are. The main benefit of regular seeds is their lower price.

If growers don’t mind doing the extra work, they may consider regular seeds. This comes with a big risk, especially if the grower is new to cultivation. First, they can’t reliably tell the difference between male and female hemp seeds. The only sure way to determine the sex is to plant them and wait until they reach the pre-flowering stage.

Another hurdle is finding the small pollen sacs of male plants. If the newbie grower misses even a few pollen sacs — and they end up pollinating the females — occurs a major reduction in the number of cannabinoids the females produce.

Theoretically, they don’t because they are supposed to grow into female plants only. Those female plants then produce buds instead of seeds. The hemp plant creates seeds when the pollen from a male plant pollinates the flower of the female plant. In the absence of male plants, there is no pollen and pollination. Hence, no seeds are produced.

Are Regular Seeds Better Than Feminized?

Feminized seeds offer incredible benefits, but there are different ways of growing hemp. These seeds are a good option for new growers because they eliminate the guesswork and the pressure to identify and eradicate the male plants. But, there is no guarantee that these seeds won’t ruin the yield by growing a male plant that could accidentally pollinate the females. New growers should also know how to spot and eliminate a male plant.

Feminized seeds are specific seeds that create exclusively female hemp plants. They maximize yields by decreasing the risk of creating unusable male plants that can accidentally pollinate the female plants.