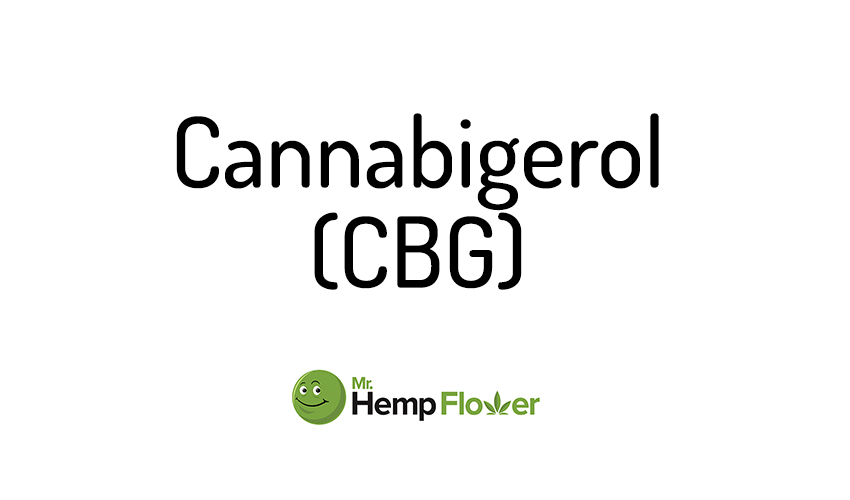 A minor hemp cannabinoid with many potential therapeutic benefits. It displays antibacterial, antimicrobial, and anti-inflammatory properties. CBG is legal in the U.S. when sourced from hemp plants with less than 0.3% THC. It’s a non-intoxicating phytocannabinoid (it doesn’t get you high) and a decarboxylated form of cannabigerolic acid (CBGA) — the mother of all cannabinoids.

“Cannabigerol is a unique cannabinoid that features a wide range of potential therapeutic benefits.”

“The new CBG Goldylocks Hemp Flower from Mr. Hemp Flower is the only thing that makes my day more relaxing.”

This compound was discovered in 1964 by Yehiel Gaoni and Raphael Mechoulam.  Cannabigerol is one of over 120 cannabinoids found in the cannabis plant. Hemp flower strains high in CBG, like Black Label CBG Hemp Flower, are increasing the popularity of this cannabinoid. These strains don’t make the user “high” but offer many potential therapeutic benefits.

Following this primary conversion process, CBGA is left in the plant only in trace amounts. Several weeks before harvest, this compound is available at higher concentrations. So, when you buy CBG-rich hemp flower and expose it to heat through smoking (the process of decarboxylation), CBGA converts into CBG — the neutral cannabinoid that interacts with the body’s receptors.

This cannabinoid stimulates a response in the body by interacting with the two main cannabinoid receptors, CB1 and CB2. These two receptors are located in the brain and immune cells and help regulate natural processes like mood, pain, and appetite. According to research, CBG has a stronger affinity for the CB2 receptor. But, it also communicates with the endocannabinoid system in ways that researchers don’t fully understand. This compound binds with the body’s receptors in its own unique way that doesn’t resemble THC’s and CBD’s, producing distinct physiological benefits.

We still don’t know as much about this cannabinoid as we know about CBD and THC. It shares some similarities with CBD because it acts as an anti-inflammatory and antibacterial agent. This phytocannabinoid also has some unique therapeutic properties and may serve as a potential treatment for inflammatory bowel disease and glaucoma, as shown in animal studies.

Medical Benefits and Uses of CBG

Despite being discovered in 1964, the research on this cannabinoid has been slow because it’s present in low amounts in most cannabis strains. Recently, a surge of studies has begun uncovering the potential medical uses of this molecule. Here are some of the benefits of cannabigerol:

Inflammation and oxidative stress may contribute to neurodegeneration (when a neuron loses its structure, function, or both). Neurodegeneration is linked to diseases like Alzheimer’s. One 2018 test-tube study published in the International Journal of Molecular Science revealed that CBG might act as a protective agent against neuroinflammation and oxidative stress. This could possibly lead to cell loss prevention.

Like many cannabinoids, cannabigerol displays potential anti-inflammatory properties. Studies show that chronic inflammatory diseases on the digestive tract, like inflammatory bowel disease, may benefit from treatment with CBG.

One 2013 preclinical study on mice revealed that this cannabinoid reduced bowel inflammation, oxidative stress, and nitric oxide production in intestinal cells (certain types of inflammation generated it at high levels). Further research has demonstrated that this cannabinoid may help suppress the immune response in diseases characterized by inflammatory and autoimmune components.

Many diseases like cancer and AIDS cause reduced appetite and cachexia, which results in weakness or wasting of the body. Typically, cannabinoids like THC are used to stimulate appetite in these patients. Cannabigerol is a non-psychoactive alternative to THC that may also stimulate appetite.

One 2017 study published in the journal Behavioral Pharmacology revealed that purified CBG may stimulate appetite in rats, increase the number of meals consumed, as well as their size. When consumed as part of a botanical drug substance, this cannabinoid proved more effective than when consumed as an isolate.

Many cannabinoids like CBD, CBC, THC, CBN, and CBG possess antibacterial and antiseptic qualities that show promise in treating Methicillin-resistant Staphylococcus aureus (MRSA). MRSA is a superbug that causes difficult-to-treat infections in humans. Cannabigerol displays a highly potent activity against an MRSA strain, according to a 2008 study published in the Journal of Natural Products. But, researchers have yet to reveal the exact mechanisms of action of this compound.

Researchers discovered therapeutic potential of cannabinoids for the treatment of glaucoma — the leading cause of blindness in the world. According to a 2009 study, CBG may help intraocular pressure, one of the symptoms of this condition. The study published in the Journal of Ocular Pharmacology and Therapeutics revealed that both CBG and THC helped relieve pressure in the eye. Unlike THC, this cannabinoid didn’t affect some phases of sleep.

CBG and the Entourage Effect

Each cannabinoid possesses its own unique pharmacologic activity. But, that activity multiplies when various cannabinoids are taken together as part of whole-plant extract. When combined, cannabinoids interact directly or indirectly to modify the overall clinical effect. Such interaction is known as the entourage effect because some cannabinoids (not all) may act synergistically.

The overall synergistic effect on the body depends on the concentrations of the compound and the health of the organism. Research shows that when working synergistically, compounds like CBD and CBG may help tame the intoxication effects of THC and potentially increase its therapeutic abilities.

Hemp and marijuana are two different varieties of the cannabis plant. The main difference between the two is that hemp produces less than 0.3% THC, while marijuana produces over 10% THC and is considered an illegal substance federally.

CBG as a compound is the same regardless of which cannabis variety it comes from. The only issue that may arise is the legal implications of selling marijuana-derived CBG in a state where marijuana is not legal.

Otherwise, CBG is more prevalent in hemp flower than marijuana flower, which is great because it can be used in every state that has implemented hemp laws. When it comes to whole-plant CBG extract, the difference is in THC levels it may contain. As we’ve said, if the extract comes from hemp, it contains higher CBD levels and lower THC levels.

Where Can You Find Hemp Flower High in CBG?

You can easily find top-shelf CBG hemp flower strains online. Hemp plants tend to have a higher concentration of CBG than THC-rich strains. This Goldylocks GBG Hemp Flower contains whopping 23.68% CBGA levels and terpenes like bisabolol, caryophyllene, and guaiol. This cannabinoid is present in a concentrated form in this Full Spectrum CBG Shatter and comes as an edible in these sugar-free Full Spectrum CBG Gummies (20mg of CBG).

In the marijuana world, cannabis strains high in CBG are considered Type IV cannabis. The first type is THC-dominant, Type II is mixed CBD and THC, and Type III is CBD-dominant.

Similar to cannabidiol, the source of this cannabinoid determines its legality. CBG products made from the hemp plant are legal federally with some restrictions depending on the state. When derived from marijuana that contains more than 0.3% THC, these products are considered illegal.