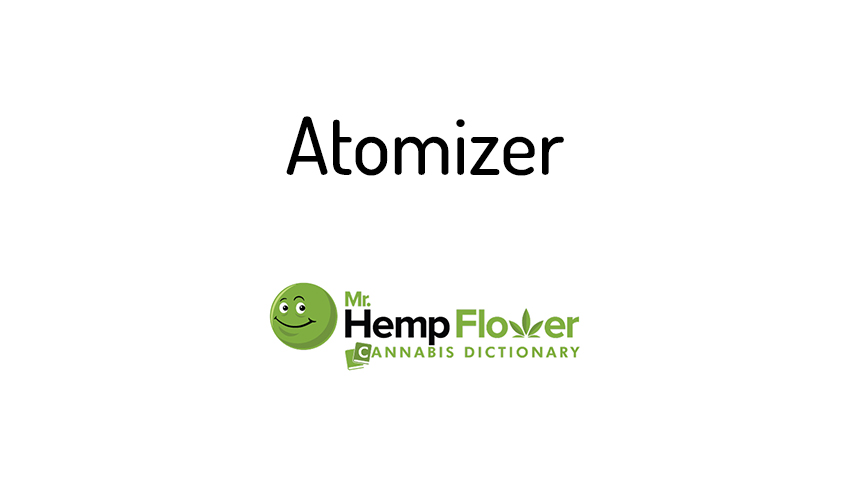 The element in a vape pen that heats and converts the cannabis e-liquid into an inhalable vapor. It’s an e-liquid vape tank (heating chamber) that works for cannabis e-liquids, including CBD oil. There are some atomizers designed explicitly for vaping CBD flower and are known as dry herb atomizers. This term may also be used as an umbrella term that refers to the unit of vape carts that contains the heating coils and wick.

“An atomizer is the part of the vape pen where the CBD concentrate or CBD flower are heated to produce a vapor.”

“I’ve always wanted to try vaping CBD, so I just bought my first vape atomizer to get my feet wet.”

You can use it as a heating chamber for CBD oil, CBD concentrates, or hemp flower. You will need a separate device for each of these products and consistencies because you can’t vape a liquid in a dry vaporizer and vice versa.

Vaping CBD flower includes heating the dry flower just enough to produce vapor that contains the desired cannabinoids. Depending on the device, you might go through trial and error before discovering the best temperature for vaping your flower.

Is it the same as a coil?

In the past, the term atomizer referred to the coil of a vape tank. The coil is responsible for vaporizing e-liquid. As vapes began to evolve, this term was used to describe the entire vape tank or the thing you put on top of a mod to vape. Nowadays, the coil is considered a component inside the atomizer, and an atomizer is an umbrella term that describes:

In general, vape pens that heat regular e-liquids (not cannabis) contain a standard atomizer that generates heat needed to create vapor. From a technical standpoint, there is no difference between a traditional and a cannabis atomizer. But, it’s important to know that a regular one won’t achieve the same result as one specifically designed for vaping cannabis e-liquids or CBD oil. So, when choosing this tool, make sure to read carefully what it’s intended for. Some devices are made for CBD concentrates instead of liquids or CBD flower.

The part of a vape cartridge powered by a vape battery that heats the CBD product and activates the cannabinoids.