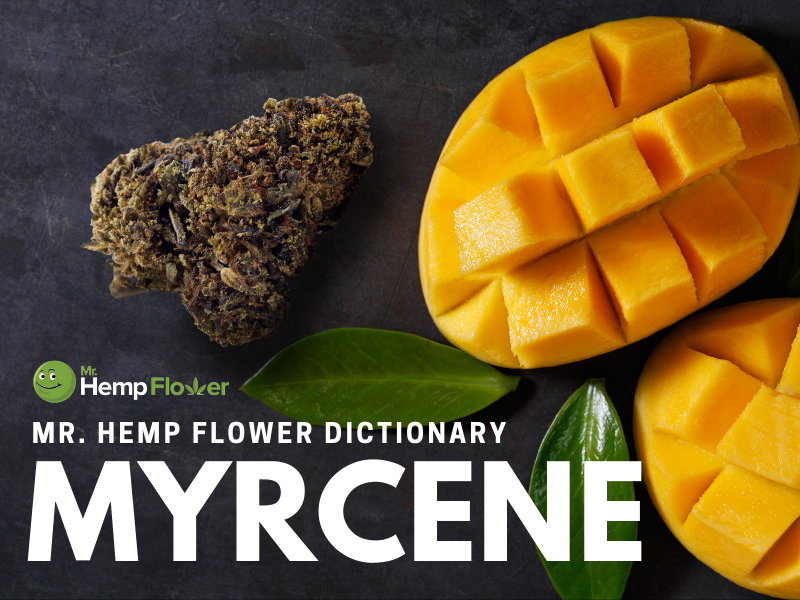 Myrcene, also known as beta myrcene, is a monoterpene and a primary organic compound in various plants and fruits. You’ll taste it in hemp, parsley, thyme, bay, cardamom, hops, lemongrass, and mango fruit. Despite being present in its natural form in herbs and fruits, it’s commercially produced from beta-pinene — a terpene found in turpentine. Myrcene is the most prominent terpene in the cannabis plant. One 1997 study by the Swiss Federal Research Station for Agroecology and Agriculture found that this terpene makes up to 65% of the total terpene content in cannabis.

“Did you know that both hops in beer and hemp contain the terpene myrcene?”

“This hemp CBD wax brings an earthy flavor to my pre-rolls because it contains a high level of myrcene.”

It’s the most abundant terpene in hemp, praised for its earthy fragrance and flavor. Some people describe it as smelling the scent of clove or musk, while others perceive a balsam fragrance in it. Aside from being common in hemp, this terpene is found in hops used in beer — which is why it may be experienced as having a peppery or spicy taste.

This terpene is primarily used as an ingredient in cosmetics and fragrances. It’s a component of many herbal teas, including lemongrass tea, used in folk medicine to naturally battle insomnia and calm the mind. Lemongrass is also used as a relaxing tea or a flavorful ingredient in Asian cuisine. If you are not a fan of lemongrass, you might have experienced this terpene through parsley or mango fruit.

What are the therapeutic effects of myrcene?

Researchers have explored the potential effects of this terpene that, similar to bisabolol and other terpenes, shows potential anti-inflammatory and sedative benefits.

One 2015 study published in the European Journal of Pharmacology investigated this terpene’s potential effects on osteoarthritis. Researchers used human cartilage cells for this experiment and found that myrcene had anti-inflammatory benefits on the cells, and it slowed damage and disease progression. Despite the success of the experiment, further research is needed.

One of the most significant properties of this terpene may be its potent antioxidant benefits. One 2017 study published in the American Journal of Chinese Medicine revealed that myrcene might possess the ability to protect against ultraviolet light-induced human skin aging. Further research is needed, but this study suggests that its partly antioxidant effects make this terpene a beneficial ingredient to anti-aging and sunscreen lotions.

The potential of myrcene to get you high

Science is clear that this terpene, if consumed on its own, will not get you stoned. But, high levels of this terpene may contribute to fast-acting and powerful highs. Although this is more relevant to marijuana, it can be useful to know if you are a hemp consumer.

One study published in 2016 in Nutraceuticals found that this terpene may give a stronger high sensation because it plays a crucial role in facilitating the transport of cannabinoids into the brain. Like other terpenes, this strain plays a role in the entourage effect or the theory that hemp components work synergistically to modulate and increase the potency of the plant.

Which hemp strains are high in myrcene?

As a primary hemp terpene, myrcene is present in high amounts in most hemp strains, including:

As this terpene is known to produce greater relaxation, you may also try it through concentrates. You’ll love Granddaddy Purp CBD Wax and Full Spectrum CBD Crumble – Tangie, rich in myrcene and other terpenes.

Known as the most significant and frequently found terpene in hemp, myrcene displays an earthy aroma with sweet undertones. It also shows a list of potential therapeutic benefits, including anti-inflammatory and sedative.