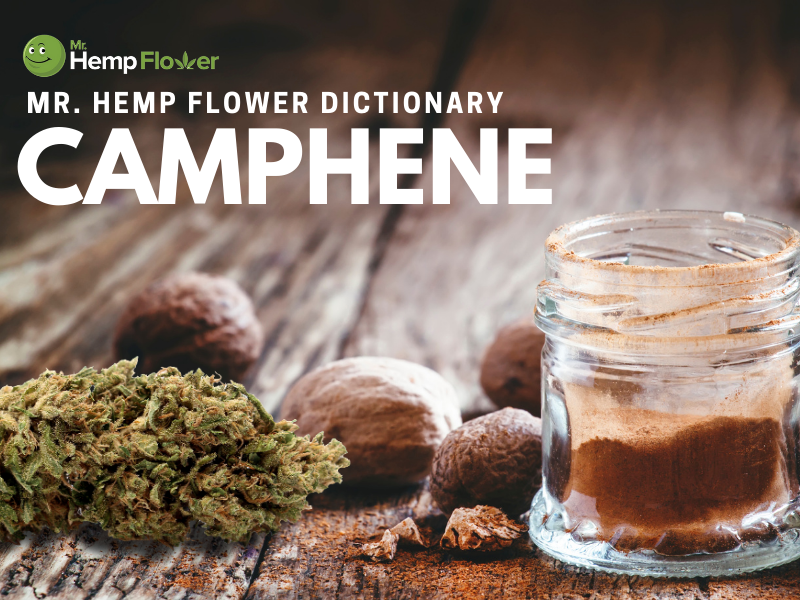 It’s a hemp terpenoid recognized for its pungent aroma and powerful pain-relieving and antioxidative properties. Research shows camphene’s potential in treating cardiovascular diseases. It acts as a potent antioxidant that prevents and slows cell damage caused by free radicals.

“Did you know that camphene is a hemp terpene that people used as lamp fuel in the past?”

“This hemp strain’s pungent herbal aroma may come from the camphene in it.”

It’s a plant-derived monoterpene with multiple uses. Aside from hemp, this colorless to white crystal is present in trace quantities in nutmeg, cypress, rosemary, ginger, and valerian essential oils. An organic aromatic compound with anti-inflammatory properties, camphene is frequently used in aromatherapy. It’s also a common food additive because of its flavor-enhancing effects. The terpene’s woody, piney scent makes it the perfect fragrance ingredient.

In the 19th century, people used it as a primary source of fuel for lamps. Later replaced by kerosene, camphene’s flammable nature made them seek a suitable replacement that won’t present a hazard.

It exhibits a very pungent and musky odor of fir needles and damp earth. It also has a herbal aroma with undertones of pine, so it’s often mixed up with myrcene because of similarity in scents. However, camphene’s scent is more abundant and unpleasant.

Due to camphene’s calming abilities, the citronella oil is a minor ingredient in bark collars for dogs. This topic sparked controversy because many veterinarians warn against the oil’s use with pets due to possible toxicity. Like other terpenes, camphene is a component of cosmetic products such as creams and ointments.

This terpene has plenty of science-backed benefits. Here are the most important ones:

Several studies point out its potent antioxidative properties. One animal study found that camphene, in combination with other terpenes, reduces oxidative stress. Oxidative stress leads to cell and tissue damage as a result of an imbalance of antioxidants and free radicals in the body.

An ointment containing menthol, camphene, and essential oils may help with chronic bronchitis and respiratory conditions. One experimental animal study showed promising results of such a terpene mix in bronchospasms and secretion.

Hemp terpenes are widely recognized for their antifungal properties. One study found that camphene exhibited antifungal activity when combined with other terpenes like borneol and camphor.

The two most common reasons for hemp use are pain relief and inflammation. In combination with other terpenes, camphene shows anti-inflammatory effects that bring pain relief. They are especially effective for pain management in people experiencing chronic pain.

This colorless crystal with camphor-like odor does not cause ab allergic reaction to human skin. In animal studies, a slight concentration of it in the diet reduced body weight gain. It also showed low toxicity and slight irritation to the eyes. This terpene is flammable when heated.

What is its role in hemp?

You can recognize it in some hemp strains from its earthy, musky aroma. It exhibits flavor-enhancing properties that accentuate hemp’s distinctive flavor. This terpene belongs to the group of minor terpenes found in hemp, common in the Kush strains.

From serving as a fuel for lamps in the past centuries to its new role as a beneficial component, this terpene offers multiple uses. Aside from giving hemp its distinctive aroma and flavor, camphene shows potential in treating various ailments.