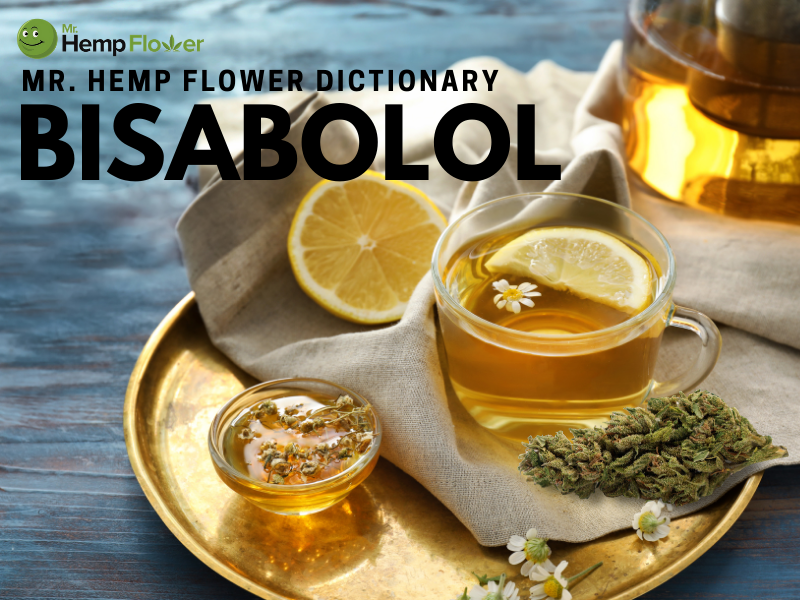 Bisabolol (also known as alpha-bisabolol or levomenol) is a naturally occurring terpene in the hemp plant and a primary ingredient of the essential oil from the camomile flower. This gift of nature exhibits a subtle, sweet, floral fragrance detectable in some hemp strains more than in others. A terpene powerhouse, it offers anti-inflammatory, analgesic, antioxidant, and antimicrobial properties.

“Did you know bisabolol is a hemp terpene also found in chamomile tea?

“Bisabolol is one of the primary terpenes in Northern Lights NLX Hemp Flower.”

“The Cat’s Meow Hemp Flower has a softer floral aroma, maybe from the high percentage of bisabolol in it.

Bisabolol is a naturally occurring monocyclic sesquiterpene in the hemp plant, the German Chamomile, and the candeia tree of Brazil. Scientists isolate this terpene for its skin-healing properties, making it a common ingredient in cosmetics.

Where does it come from?

Bisabolol is a very thick terpene that releases a weak sweet, and floral smell. When you drink Chamomile tea, you can notice it’s slightly sweet and flowery aroma.

What is bisabolol used for?

Bisabolol is a multifaceted terpene used to create various products that you likely have in your home. Known as the component that turns back the clock on the skin, the cosmetic industry glorifies it in its products. Due to its sweet aroma, this terpene makes the perfect perfume essence and flavoring agent. Let’s not forget about herbal tea. This terpene makes chamomile tea one of the most soothing and calming warm drinks.

Is bisabolol good for skin?

Have you noticed that some skincare products contain “chamomile” or “bisabolol” on their ingredient list? Known as the team player in skincare, this terpene increases other compounds’ penetration power, helping the skin absorb them effectively. It is a skin penetration enhancer — assists all of the healthy ingredients contained in the cosmetic product to penetrate properly into the skin. This is very useful for skincare items containing ingredients that are not easily absorbed, like vitamins and antioxidants.

Aside from the cosmetic industry’s claims that this terpene prevents premature aging of the skin, this terpene offers a handful of other potential therapeutic properties.

A 2014 study published in the journal Current Pharmaceutical Biotechnology found that bisabolol reduced skin inflammation in animals. This terpene is safe for topical application and shows potential for treating inflammatory skin conditions like dermatitis.

A 2012 study published in the journal Archives of Oral Biology revealed that when paired with tea tree oil, this terpene may effectively treat “bad breath” caused by oral bacteria overgrowth. According to the study, the bacteria causing “bad breath” die when exposed to tea tree oil and bisabolol.

Despite being a common ingredient in cosmetics, bisabolol’s anti-irritant properties need further research. A 2016 clinical research published in the journal Contact Dermatitis found that it has no effect on skin irritation.

Because of its low toxicity, the Food and Drug Administration (FDA) granted bisabolol with Generally Regarded as Safe (GRAS) status. It proved safe for topical application and non-toxic and safe for ingestion in tea or hemp. This aromatic compound doesn’t have reported side-effects.

Where can you get bisabolol?

Bisabolol is more than a fragrance essence and a cosmetic ingredient. It’s anti-inflammatory, antimicrobial, and pain-relieving properties show promise in the fight against various ailments.