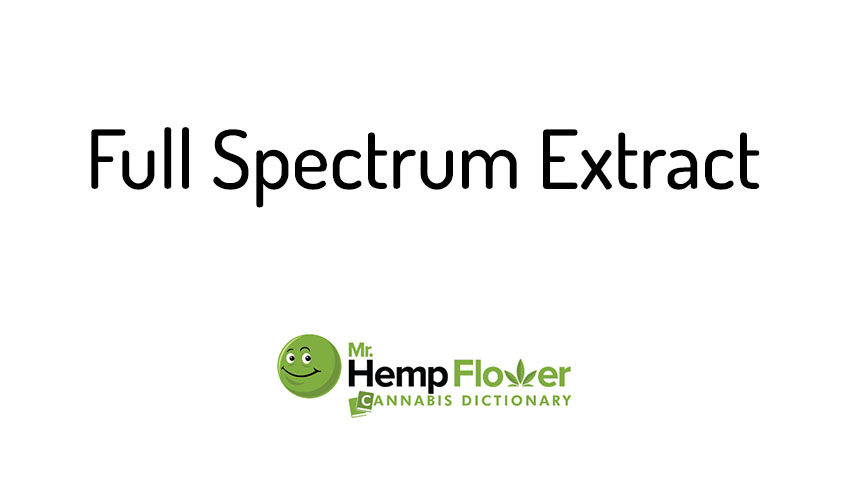 A substance that contains all of the beneficial compounds naturally found in raw cannabis. Full-spectrum extract preserves the full cannabinoid and terpene content of the hemp plant. It maintains a complex range of desirable compounds without altering them through decarboxylation or oxidation. When made from hemp, it contains high cannabidiol (CBD) levels and tiny amounts of THC. When made from high-THC cannabis, it’s typically used recreationally for intoxication. Popular CBD concentrates considered full-spectrum are Phytocannabinoid-rich (PCR) Hemp Oil, sauce, live resin, crumble, and more.

“Did you know that live resin is a full-spectrum CBD extract that preserves the volatile terpene profile?”

What Does It Mean?

The term “full-spectrum” refers to something that shows a complete range of possible elements. In other words, full-spectrum means comprehensive. In the cannabis industry, this term describes a concentrate made to preserve the full cannabinoid and terpene content naturally found in the raw cannabis plant.

In their raw form, cannabis cultivars exhibit a unique cannabinoid and terpene profile responsible for the most significant therapeutic effects. The plant’s lipid and fat-based trichomes create these cannabinoids and terpenes. Full-spectrum extract is a type of cannabis concentrate that aims to capture all of the therapeutic phytochemicals of the plant, at the moment of processing. It excludes all the undesirable waxes, lipids, and fats that hold these components together but offer no medicinal value.

In cannabis context, the term “spectrum” describes the range of phytochemicals a product contains. It’s an essential word that tells the user which cannabinoids and terpenes (if any) are included in the product, which showcases its potential therapeutic effects. Full-spectrum means the full range of compounds produced by the plant’s trichome glands.

The cannabis plant can produce over 400 compounds. Aside from well-researched cannabinoids, it carries a phytochemical treasure yet to be discovered. Unknown compounds, like aromatic terpenes, flavonoids, proteins, phenols, etc., may potentially have therapeutic uses. This extract seeks to capture and retain all of these desirable compounds beneficial for human consumption.

For example, a full-spectrum CBD extract strives to maintain every beneficial component, including trace amounts of the intoxicating THC. Keeping THC in the mix gives full-spectrum extracts an advantage against broad spectrum CBD extracts. This advantage is commonly known as the “entourage effect” — a phenomena that describes the highly beneficial relationship born from the synergy between different cannabinoids, terpenes, and other phytochemicals.

The beauty of the cannabis plant is in its versatility. Each cultivar or cultivated variety of the plant has a unique chemical profile — its production and expression heavily depend on the environment. Each cultivar inherits its terpene profile, but the total terpene yield per weight of plant tissue is more dependent on environmental factors.

Therefore, each cultivar offers a unique chemical profile. The plant’s chemical makeup is so versatile that two plants of the same cultivar can differ in their chemical profiles — especially if subjected to different environmental conditions during cultivation.

Full-spectrum cannabis extraction preserves the nature of the extracted compounds. Within the extract, cannabinoids are present in their acidic forms (THCA, CBDA, CBGA) because they’re not being decarboxylated in the process. The process of decarboxylation happens when a compound is exposed to heat or prolonged overexposure to environmental stress. Under these conditions, the compound loses carbon atoms and releases carbon dioxide.

The best example of decarboxylation is the conversion of THCA into THC, the intoxicating cannabinoid. THCA doesn’t produce intoxicating effects until it’s broken down into the active compound THC. Acidic cannabinoids offer therapeutic benefits that differ from those of their neutral counterparts. Sometimes, users don’t want to use decarbed extracts for this very reason. Full-spectrum extracts (sauce, live resin, etc.) preserve cannabinoids in their acidic forms.

Aside from direct exposure to heat, acidic cannabinoids may decarboxylate into neutral forms (CBDA into CBD) on their own. This depends on the conditions of drying and storage processes.

Spectrum Changes During Cultivation and After Harvest

During growth, the cannabis plant produces an ever-evolving set of compounds. The trichomes (resinous glands) produce cannabinoids and terpenes through biosynthesis. Biosynthesis allows enzymes to catalyze a series of chemical reactions and turn simple (smaller) molecules into complex ones. Enzymes are like tiny biological machines that use chemical (rather than mechanical) energy to build structures like terpenes and acidic cannabinoids.

Can this process be paused for the plant to retain its compounds intact?

For example, the grower harvests a Special Sauce CBD Flower and splits it into two halves. They flash-froze the first half to preserve the compounds available at the moment of harvest. Freezing them ensures that none of the temperature-sensitive terpenes is lost. The grower dries and cures the second half using traditional methods. During this process, the plant loses some of the terpenes. The remaining will most likely be altered by oxygen to some extent.

Now, the two halves have a different spectrum of compounds ready to be extracted. If an extractor removes all compounds from each, both could be considered full-spectrum extracts, but not both have the same available spectrum. By giving them different names, processors indicate the state of components at the moment of extraction. Therefore the first product is considered a live resin full-spectrum CBD extract, while the second is whole plant full-spectrum hemp CBD extract.

The spectrum of available components varies greatly from cultivar to cultivar and the chemical makeup will largely depend on time of extraction from the plant. Both environmental factors and genetics are at play when creating the spectrum of compounds expressed by one cultivar.

Which extracts are full-spectrum?

The main difference between the two is that one is extracted from cannabis with high levels of THC, while the other is extracted from the hemp plant with high levels of CBD. The hemp plant is a variety of cannabis that contains less than 0.3% THC, while the rest of the cannabinoid and terpene profile remains more or less the same.

Full-spectrum Cannabis Oil is composed of roughly 50% THCA and terpenes within the range of 13% to 40%. This concentrate is guaranteed to get you high.

PCR Hemp Oil, on the other hand, is the most powerful CBD oil on the market. The main ingredient in this oil is cannabidiol (CBD), but it also contains the entire hemp plant profile, including proteins and other phytonutrients. Despite the spectrum within these oils not being the same as of a live plant, they’re still considered full-spectrum because they capture all of the available components at the time of extraction. PCR oil is non-intoxicating.

Let’s take a look at some full-spectrum extracts aside from the typical oils:

A popular cannabis concentrate, terp sauce is a non-uniform extract with a liquid, sticky consistency. It’s completely stripped off of the plant’s lipid-rich exterior and contains most (if not all) of the compounds in the hemp plant. Sauce extracts are favored for the high levels of terpenes, which makes them exceptionally flavorful.

Terp sauce can be a full-spectrum product, but not always. This extract may be free of plant waxes and fats, but the process of removing a solvent may alter some of the available components. Losing some of the compounds during extraction will deprive this extract of its full-spectrum status. Regardless, sauce comes exceptionally close to maintaining all available compounds of the raw hemp plant.

A newly developed extraction method that creates the freshest cannabis concentrate on the market. Live resin is considered the future of cannabis extracts. All extracts made from freshly frozen plant material immediately after harvest are considered live resin. They maintain the full-spectrum available at the moment of harvest. Their aroma is as potent as of a live hemp plant.

Products labeled Live Resin Full-spectrum Extract explicitly imply to the consumer that they contain all of the compounds available at the moment of harvest. Therefore, this extract is of the highest purity and potency because the plant’s phytochemical makeup is at peak right after harvest. Live resin is the most flavorful and aromatic concentrate on the market. Unlike other concentrates, it contains a higher ratio of monoterpenes, which are typically lost during the drying period.

Crumble is a full-spectrum CBD concentrate made from distillate and plant-derived terpenes. Also known as “honeycomb wax,” it has a malleable texture that “crumbles” or falls apart when handled. Like all extracts, crumble is made using a solvent and trimmed, cured nugs or freshly harvested plant material.

Full-spectrum extract refers to a substance that contains all of the extracts naturally found in the cannabis plant.