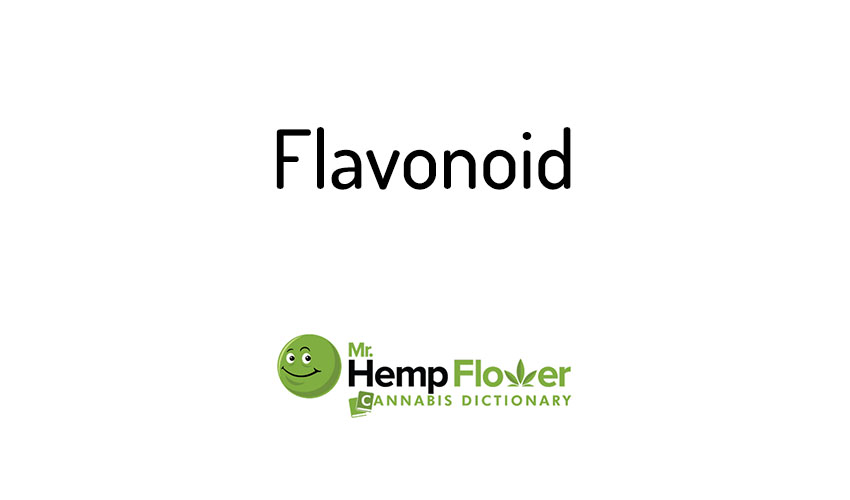 Organic compounds found naturally in many fruits and vegetables, with a primary role of giving plant life their color pigmentation. Flavonoids work synergistically with terpenes to create hemp’s distinctive aroma and flavor. Plant products like wine, tea, and chocolate also carry these organic compounds. Food contains six different types of flavonoids, and the body breaks down each kind in a different way.

“Did you know that the beautiful purple color of some hemp flower comes from the flavonoid group known as anthocyanins?”

“Flavonoids and terpenes are responsible for hemp’s color, aroma, and flavor.”

The hemp plant contains 200 or more bioactive compounds (discovered so far), but we mostly hear about cannabinoids and terpenes. On par with these two essential compounds are flavonoids. They account for about 10% of all components in Cannabis sativa L., with 20 varieties known to the plant.

These aromatic compounds are not unique to hemp. Researchers have identified thousands of flavonoids throughout nature — present in flowers, fruits, and vegetables. The group of flavonoids found only within cannabis is known as cannaflavins.

They are similar to terpenes in their role of determining how we perceive cannabis throughout our senses. But, unlike terpenes, these compounds are among the most understudied in hemp, which is unfortunate because they offer more than what meets our taste buds.

This diverse group of phytonutrients is found in nearly all fruits and vegetables. They are the largest phytonutrient group, with over 6,000 varieties responsible for greens’ vivid colors. Their functions in plant life span a diverse spectrum.

Similarly, these compounds affect the pigmentation of cannabis. The word “flavonoid” comes from the Latin flavus, which references naturally appearing yellow. A suitable name as their primary function is to give plants their color pigmentation. The pigmentation is especially notable in flowers, and it’s there to attract pollinators.

The large majority of edible fruits and vegetables contain non-green pigmentation. To a degree, they owe their bright colors to these compounds. Aside from color pigmentation, flavonoids have a partial protective role in plants. They guard them against potentially harmful UV rays, pests, and diseases.

They Provide Flavor and Aroma

The specific flavors and aromas of the hemp plant are often attributed to terpenes. But, flavonoids also play an important role in the unique scent and flavor qualities of each strain variety. Both terpenes and flavonoids are responsible for the plant’s powerful odor and flavor. The synergistic attributes these compounds share allows us to differentiate between various hemp strains.

Take the flavonoid group Anthocyanins as an example. They are naturally produced pigments that give flowers their red, purple, and blue coloration, depending on pH levels. Aside from hemp, they are present in berries and red wine, gifting them beautiful, deep purple coloration. If a hemp flower strain you like oozes purple or blue tones, it most likely contains this organic group of compounds.

Aside from providing color pigmentation and flavor, research shows that these compounds are highly pharmacologically active. This means that they play a part in the medicinal benefits of cannabis.

Researchers are unsure whether these compounds enhance the properties of cannabinoids or modulate their efficacy. They know that these components help regulate cellular activity and fight off free radicals that cause oxidative stress. This allows the body to function more efficiently because they offer protection against everyday toxins and stressors.

A great example of such protection is the flavonoid Quercetin, which is found in many fruits and vegetables. This component is antifungal and antioxidant. As powerful antioxidant agents, they help the body fight off potentially harmful molecules introduced to the body.

Another example is the flavonoid found in cocoa and teas, known as Catechins. This molecule is a known antioxidant with cardiovascular benefits. A study published in the Journal of Translational Medicine revealed that people who consumed higher levels of flavonoids were less likely to experience a cardiovascular event.

Cannaflavin A is pharmacologically active in cannabis. According to research, it displays anti-inflammatory properties that might be stronger than those of Aspirin. Scientists are also looking at the potential medical benefits of other flavonoids like Cannaflavin B and C. Other particularly active flavonoids in cannabis are Orientin, Silymarin, Quercetin, and Kaempferol. They all possess anti-inflammatory, antifungal, and antioxidant potential.

Flavonoids and The Entourage Effect

The entourage effect (or ensemble effect) is a theory that refers to the synergistic nature of the pharmacologically active compounds in cannabis. The human body is equipped with an endocannabinoid system (ECS) that maintains internal regulatory balance or homeostasis. The ECS is a vast network of receptors spread throughout the body.

Cannabinoids bind to the ECS’s receptors or influence it in different ways to produce their effects. Terpenes and flavonoids further influence the workings of cannabinoids in the ECS. Researchers discovered that different combinations of these phytochemicals could cause different effects in the body. This is due to the synergistic properties of these compounds.

A basic example of the entourage effect would be that cannabidiol (CBD) doesn’t produce the same outcome individually and when paired with tetrahydrocannabinol (THC) and terpenes. CBD modulates the effects of THC by lowering its psychotropic properties. Flavonoids are thought to possess similar synergistic abilities.

Further research is needed to determine their exact mechanism of action of these compounds. The focus in cannabis research remains on cannabinoids and terpenes, leaving them vastly understudied.

Organic compounds found in cannabis and most plant life. They offer incredible antioxidant and anti-inflammatory benefits.