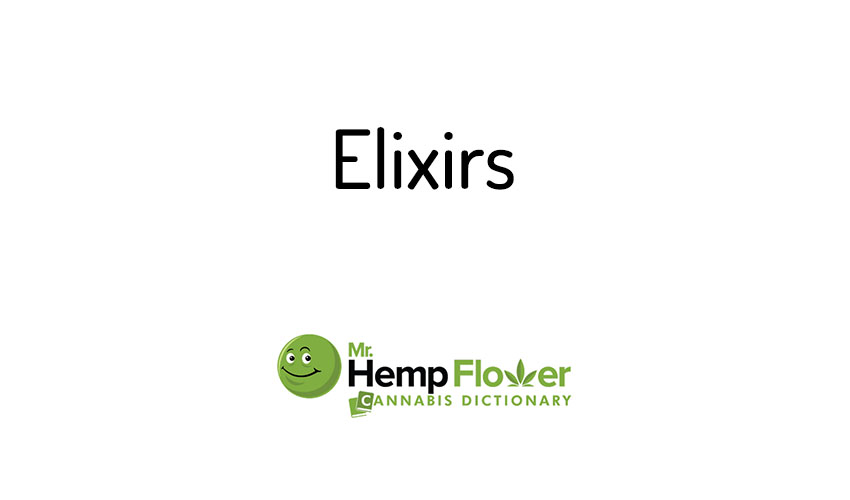 In the cannabis industry, this term describes any drinkable product that contains cannabinoids or cannabis-derived terpenes. Products known as elixirs range from tinctures to infused sodas, wines, and beverages infused with cannabis. The difference between marijuana elixirs and hemp CBD elixirs is that the first are made to bring out the plant’s medicinal and intoxicating effects. As you may know, cannabidiol (CBD) drinkables are not intoxicating, meaning they’re not going to get you high.

“I found a great elixir recipe to best use my cannabidiol-infused syrup.”

“Did you know that there’s a variety of alcohol-based elixirs like cannabis-infused wine, champagne, and cocktails?”

Cannabis-infused beverages are digested in the body in almost the same way edibles are. The cannabinoids in this drinkable product enter the bloodstream through the stomach and liver. It takes a while before the brain senses the effects of the drink. Like with edibles, the effects of the elixir can last a few hours.

The predecessor of elixirs — cannabis tinctures — was first introduced to the Western world in the mid-1800s by Dr. William O’Shaughnessy. O’Shaughnessy was an Irish physician who lived and worked in India. In 1843, he published “On The Preparations of Indian Hemp, or Gunjah,” describing the various medicinal benefits of cannabis. The book mentioned tinctures numerous times, and his writing caused a significant increase in the popularity and use of cannabis tinctures — first in Britain and then throughout Europe and North America.

In 1851, cannabis was added to the United States Pharmacopeia — a comprehensive journal of approved medicinal drugs. After that, manufacturers started producing cannabis tinctures and elixirs to treat conditions like tonsillitis, sleep disorders, alcoholism, and tetanus.

What’s the Difference Between Tinctures and Elixirs?

These potions can be taken as a regular tincture, most commonly sublingually or under the tongue. Elixirs are typically syrup-based and have a ticker texture. So, cannabis consumers may prefer to mix them into various liquids for consumption.

You can mix it with beverages like sodas, sparkling water, and alcohol. An elixir is a popular additive to tea, coffee, and other hot beverages. It’s not only a preferred method for drinking the hemp or marijuana plant, but it’s a great substitute for honey.

Cannabis drink made for precise dosing that can be based on alcohol or other liquids.