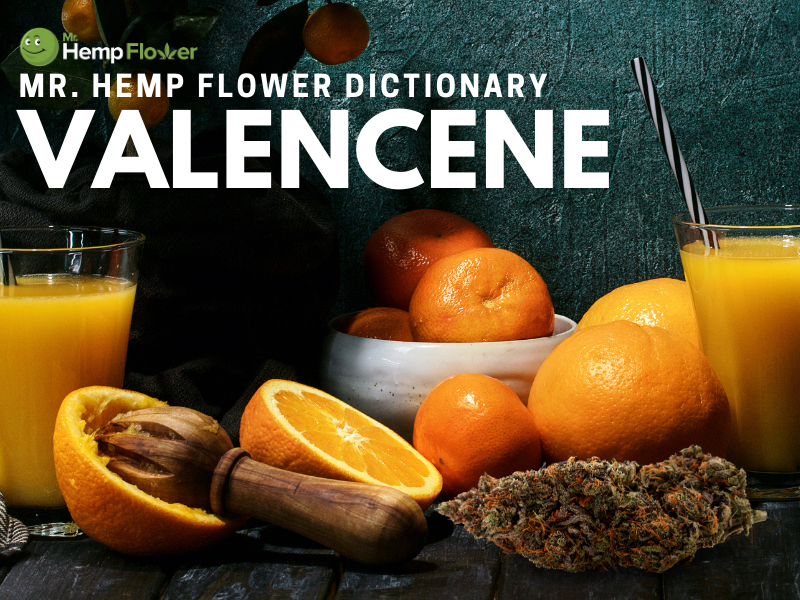 A sesquiterpene that exhibits a potent citrus aroma. Aside from the hemp plant, this terpene also occurs naturally in Valencia oranges. Due to its strong fruity citrus flavor, it’s highly valued as a food additive. Valencene possesses potential anti-inflammatory and anti-allergic properties and may act as a skin protectant.

“This Jaeger hemp pre-roll has a citrusy hint to it; probably coming from the valencene in it.”

“Did you know that valencene is a terpene found in hemp that acts as a skin protectant?”

It’s an organic aromatic compound classified as a sesquiterpene. The scent profile of valencene oozes a range of citrus aromas, including overtones of orange, mango, tangerine, and grapefruit. Due to its fresh nature, this terpene’s scent reminds of freshly cut wood or herbs. Like many other terpenes, it’s used as an ingredient in commercial mosquito and tick repellents.

Researchers are investigating the effects of terpenes, and valencene is not an exception. This terpene offers potential anti-inflammatory and anti-allergic effects. It also may act as a skin protectant. One of the most valuable findings on this terpene is that it could potentially boost the efficacy of Doxorubicin — a chemotherapy drug.

A 2011 study performed on animals found that this terpene exhibits anti-inflammatory properties. The study published in the Journal of Ethnopharmacology investigated the anti-inflammatory effects of the extract of rhizomes of Cyperus rotundus, or nut grass, which is a species of sedge. Used in folk medicine for centuries, this plant is rich in valencene terpene, which plays a key role in its anti-inflammatory qualities.

Another 2011 study investigated the essential oil of the Cyperus rotundus plant in mice and the effects of this terpene as its major component. The study published in the Archives of Pharmacal Research revealed that orally administered valencene exhibits anti-allergic activity. Such activity was also confirmed among other constituents like the terpene caryophyllene oxide.

A 2016 study that also looked at the effects of the essential oil of Cyperus rotundus discovered that this terpene might be useful in combating aging of the skin caused by ultraviolet rays from the sun.

May improve the efficacy of chemotherapy drug

One 2017 study published in Molecules tested the efficacy of Doxorubicin, a chemotherapy drug, when blended with the essential oil of Myrica rubra, also known as Chinese bayberry. Valencene, humulene, caryophyllene, and nerolidol are all present in this essential oil. The authors of the study concluded that, out of all terpenes, valencene was the most effective in improving the therapeutic benefits of this drug.

This aromatic compound is a secondary hemp terpene present in several hemp strains like Lifter Indoor Hemp Flower, Jaeger CBD Flower, and Elektra Hemp Flower. All of these hemp flower strains are rich in cannabinoids and terpenes and have a pleasant aroma. The importance of secondary terpenes in hemp comes down to the entourage effect or the theory that hemp compounds work in synergy to modulate the healing benefits of the plant.

A minor hemp terpene with a sweet citrus aroma and flavor that has potential to fight allergies and inflammation.