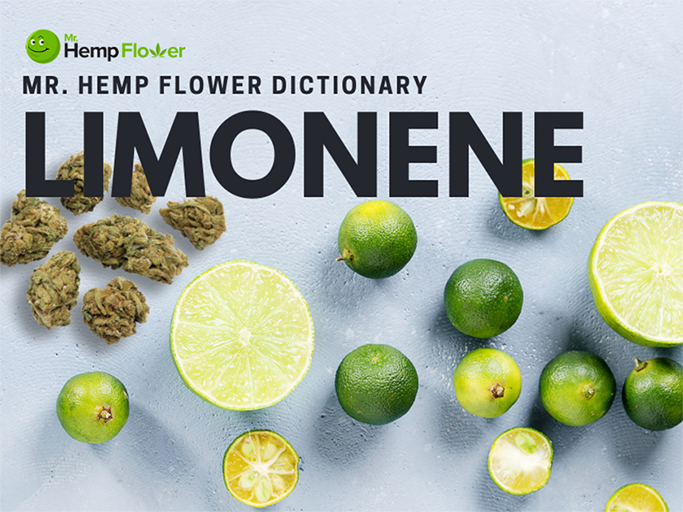 A primary hemp terpene, limonene is praised for its intense citrus fragrance. Present in the peels of various citrus fruits like lemon, orange, and grapefruit, this terpene is also found in abundance in the hemp plant. This organic compound is known for its anti-inflammatory, anti-anxiety, and antibacterial properties.

“This hemp pre-roll has a citrusy flavor and aroma, most likely from the limonene in it.”

“Did you know that limonene is a terpene found both in hemp and lemon?”

What is limonene terpene?

This terpene occurs naturally in mint, rosemary, pine, juniper, and various hemp strains. These herbs’ essential oils (like the rosemary one) are used in therapeutic massages of the scalp or as ingredients of muscle balms. People use this terpene as an organic herbicide, paint stripper, or a solvent to remove oil from machinery. For centuries, it’s been used in traditional medicine as an ingredient of natural remedies for bronchitis, gallstones, and heartburn. Modern medicine is still exploring the effects of limonene and other terpenes.

If you’ve ever used lemon or citrus-scented cleaning products for your home, you’ve probably had a whiff of limonene. Aside from being a popular ingredient in household cleaning agents, it serves as an additive in cosmetics, fragrances, and body creams. In such products, it’s used in low concentrations. In high concentrations, it acts as a skin irritant that triggers contact dermatitis in people allergic to the terpene.

Limonene is the main terpene in lemons and is present in most citrus fruits. You’ve probably tasted it when indulging in chocolate-covered orange peels, lemonade, and citrus-flavored ice cream.

It’s considered safe in humans. The Food and Drug Administration (FDA) granted limonene the status of a safe food additive and flavoring. Like many terpenes, its essential oil may cause irritation when applied directly to sensitive skin. Also available as a concentrated supplement, this terpene is likely safe to consume that way, but research on humans is lacking.

As one of the most studied hemp terpenes, it’s shown to benefit the immune system. Aside from its well-established antibacterial and antimicrobial effects, researchers study this terpene for its potential antioxidant, anti-inflammatory, and analgesic properties.

Extensive research shows that this terpene reduces inflammation. One 2017 study published in Molecular Medicine Reports demonstrated this terpene’s ability to reduce disease activity and organ damage in an animal model of ulcerative colitis. This disease is characterized by inflammation, so the benefits this terpene exhibited were due to its antioxidant and anti-inflammatory properties.

Another test-tube study in human cartilage cells revealed that this terpene reduces nitric oxide production — a signaling molecule that plays a role in inflammatory pathways relating to osteoarthritis.

Limonene is present in a range of essential oils and is widely used to treat anxiety and sleep disorders in humans. One 2013 study published in BMC Complementary and Alternative Medicine investigated the ability of limonene to reduce depression and anxiety in animals. Limonene improved anxiety symptoms by interacting with the brain’s serotonin system. This terpene didn’t display any qualities on depression.

The potential pain-relieving properties of this terpene may stem from its anti-inflammatory and antioxidant properties. Several studies have shown the potential analgesic effects of this terpene. A 2016 study in the European Journal of Pain demonstrated that limonene might act as an effective topical pain reliever.

One 2016 report published in Life Sciences investigated this terpene’s potential as a novel treatment for diabetes. Researchers used cultured cell models to demonstrate the effects of this terpene on metabolism. The report revealed that this terpene enhanced the energy expenditure of white fat cells, causing their browning. The process of browning white adipose tissue is a key focus area in research because of its fat-burning potential and favorable effect on whole-body energy metabolism. According to Turkish researchers, this terpene may act as an antioxidant and improve symptoms in animal models of diabetes.

What hemp strains are high in limonene?

You will find this terpene in various hemp strains excellent for pain, anxiety, inflammation, and sleep, including:

Limonene is one of hemp’s most common terpenes, also found in fruits like lemon, orange, and grapefruit. This terpene exhibits a potent citrus fragrance and has potential anti-inflammatory, analgesic, and antimicrobial qualities.