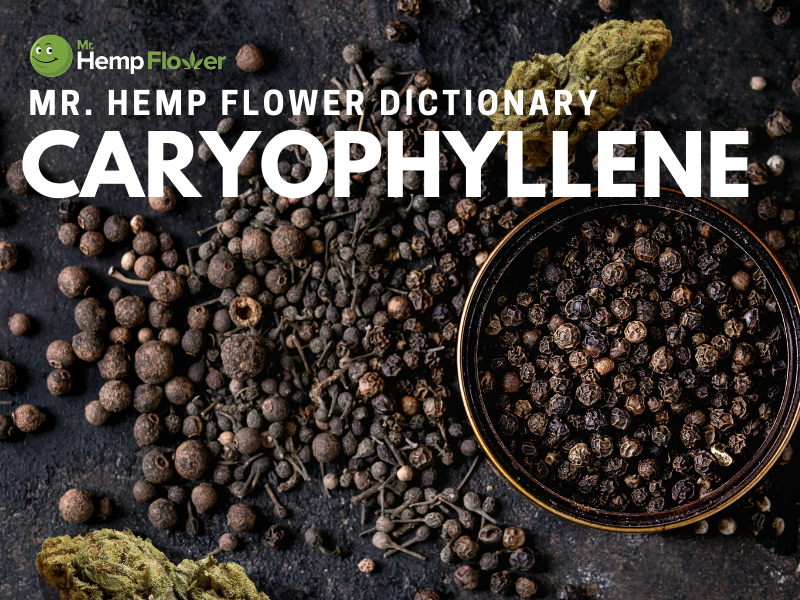 Beta-caryophyllene (also referred to as trans-caryophyllene) is a hemp terpene that features a unique aroma of herbal spiciness mixed with hints of wood. You will find this terpene in most hemp strains and plants like black pepper, hops, rosemary, oregano, and cinnamon. Its potent anti-inflammatory, antibacterial, antiseptic, and antifungal properties make it the perfect ingredient for salves and topicals. It presents a special ability to bind to the CB2 cannabinoid receptor in the endocannabinoid system (ECS).

“This hemp strain has a hint of cinnamon, probably from the caryophyllene in it.”

“Did you know that caryophyllene is a hemp terpene that gives black pepper its spiciness?”

Caryophyllene is a hemp terpene frequently used as a natural food additive. This terpene exhibits a shaded pale yellow color and sweet flavor naturally found in fig and allspice. As one of the most studied hemp terpenes, it offers a multitude of research-backed beneficial properties. Harvard researcher E. J. Corey studied caryophyllene in the 1960s, laying the groundwork for further research.

What is it used for?

If you’ve ever tried cinnamon French toast or spicy dishes like pepper steak, you’ve probably tasted caryophyllene. If you are not a fan of spicy food but like beer or “hopped whiskey,” then you are familiar with its flavor. Other beverages containing this terpene include some types of vodka.

Chewing gum with a citrusy or spicy flavor contains caryophyllene as a flavoring agent. Due to its antibacterial and anti-inflammatory profile, it’s used in various topical skin products. Like other terpenes, it’s integrated into detergents and perfumes.

It features a strong, spicy, peppery scent, also recognized in clove, basil, rosemary, and ylang-ylang essential oils. Like other terpenes, it features a refreshing, woody fragrance.

Most of the studies done on this terpene are on animals. We need further research on its effects on the human body, but so far, it’s a natural agent with a variety of benefits, including:

Beta-caryophyllene differs from other terpenes because it binds to CB2 receptors of the endocannabinoid system. The human body has two main cannabinoid receptors, CB1 and CB2 receptors. Highly concentrated in the immune system, the CB2 receptors play a role in modulating the body’s inflammatory response.

Beta-caryophyllene binds to the CB2 receptor and plays a role as its functional agonist. When doing so, it inhibits the release of cytokines — chemicals that play a key role in regulating inflammation. Due to these benefits, it’s also known as a “dietary cannabinoid.”

One 2018 study published in Proceedings of the National Academy of Sciences revealed that beta-caryophyllene proved more effective at lower doses. Another study found that it had a cardioprotective effect on mice with myocardial injury.

Some of beta-caryophyllene’s pain-relieving effects stem from its anti-inflammatory properties. One 2019 study found that this terpene impacted neuropathic pain in mice with streptozotocin-induced diabetes. This terpene reduced the level of pain felt by the mice in the study.

Another study published in the European Journal of Pain found that this terpene brought pain relief to mice. In addition, it enhanced the pain-relieving properties of low doses of morphine.

One 2014 animal study published in the journal Physiology and Behavior found that mice treated with this terpene displayed behavior that indicates a reduction in anxiety and depression.

May help with sleep

One 2012 study published in Pharmaceutical Biology found that caryophyllene may help with sleep in combination with several other terpenes. The mice in the  study experienced increased sleep time and decreased movement and body temperature.

Research published in 2018 in the Journal of Clinical Biochemistry and Nutrition found that this terpene reduced harmful cholesterol while increasing helpful cholesterol. These findings could be useful for chronic conditions like fatty liver and hardening of the arteries.

A 2015 study published in the journal Molecules found that this terpene showed selective antibacterial properties against S. aureus, the bacterium associated with food poisoning.

One animal study published in the journal Molecular and Cellular Biochemistry in 2016 found that this terpene acts as a neuroprotectant through its antioxidant and anti-inflammatory effects that could help Parkinson’s. Another 2014 study found that it reduces the neuroinflammatory response in an animal model of Alzheimer’s.

The role of caryophyllene in anxiety

Most hemp strains that aid anxiety symptoms contain caryophyllene. This terpene exhibits potent anti-anxiety properties, together with limonene and myrcene. One 2014 study on mice found that this organic compound displays therapeutic properties on anxiety and depression. The authors of the research published their findings in the journal of Physiology & Behavior, concluding that this terpene could help alleviate mood disorders.

Where to find caryophyllene in hemp?

With so many benefits, who wouldn’t want to try this terpene? The good news is, it’s present in many hemp strains, probably some of your favorite ones. Caryophyllene is a primary terpene in hemp strains like Strawberry Jam Hemp Flower, Cat’s Meow Hemp Flower, and Hemp Jam Hemp Flower. It’s also present in a high percentage in hemp CBD concentrates like Sour Diesel CBD Crystalline and Full Spectrum CBD Crumble – Tangie.

A primary component of hemp and many culinary herbs and spices, caryophyllene is one of the most beneficial terpenes.