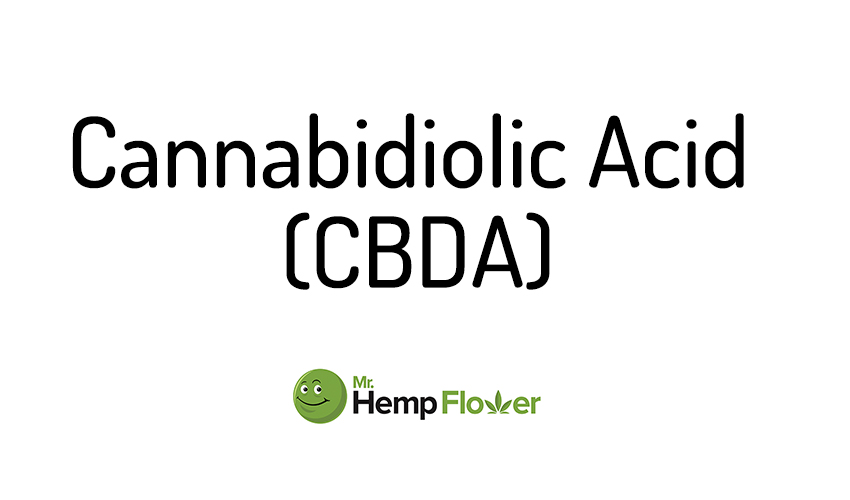 A non-intoxicating cannabinoid naturally occurring in the cannabis plant. CBDA is the precursor of cannabidiol (CBD) and is present in the trichomes of the raw cannabis flower. When exposed to heat (decarboxylation), this molecule turns into its neutral form, cannabidiol (CBD).

“Did you know that cannabidiolic acid (CBDA) can reduce inflammation despite being a nonactive cannabinoid?”

This cannabinoid was isolated in 1996 and is known as the acidic precursor of cannabidiol. CBDA is abundant in fresh, raw cannabis flowers and leaves and naturally transforms into CBD when heated.

Like other cannabinoids, this one is synthesized from the mother of all cannabinoids, cannabigerolic acid (CBGA). From CBGA originate three main cannabinoid lines, including cannabidiolic acid (CBDA), tetrahydrocannabinolic acid (THCA), and cannabichromenic acid (CBC). Enzymes in the cannabis plant cause a reaction that converts CBGA into these three lines of cannabinoids. When exposed to heat, these acidic forms turn into their neutral forms and become CBD, THC, and CBC, respectively.

This cannabinoid is unlike any other when it comes to the way it works in the body. That’s because CBDA does not interact with the endocannabinoid system (ECS) or binds directly to the CB1 and CB2 receptors. Researchers think that this chemical compound may interact with COX-2, an enzyme associated with inflammation.

It may also influence the serotonin neurotransmitter that’s associated with happiness and well-being. This component may deliver its beneficial properties by interacting with enzymes and receptors outside of the endocannabinoid system.

What’s the difference between CBD and CBDA?

One of the main differences between the acidic forms of cannabinoids and their neutral forms is that they are pharmacologically inactive. For example, CBDA doesn’t have any of the therapeutic effects that CBD does.

. Only when it’s converted into their neutral form through decarboxylation, phytocannabinoids produce the desired therapeutic properties. This means that if you consume raw cannabis in a salad or any other way that doesn’t include heat, you won’t experience any known cannabis effects.

CBDA and CBD are still similar compounds because one is the other’s precursor. Like CBD, CBDA is also non-psychotropic, meaning it doesn’t cause intoxication.

Uses and Benefits of CBDA

Despite being the inactive form of CBD, this cannabinoid may offer potentially more benefits than CBD. The compound may help with:

CBDA appears to inhibit COX-2, an enzyme responsible for inflammation and pain. Many traditional drugs inhibit this enzyme and are prescribed in the treatment of arthritis. We need studies on CBDA and arthritis, so for now, its potential to provide relief for arthritis is just a theory.

Research shows that this cannabinoid has an affinity for the 5-HT receptors, making it a potentially powerful anticonvulsant. CBDA has up to 100 times stronger affinity to these receptors than CBD and can interact more easily to demonstrate anticonvulsant activity.

This cannabinoid is legal in the U.S. if derived from legal hemp with 0.3% THC as opposed to marijuana. You can get hemp flower strains that are high in CBDA and smoke them in a pre-roll blunt, vape or cook them in edibles. You can also infuse the flower into topicals or consume it raw by juicing it and mixing it with other juices. You can also put it in salads.

CBDA is the non-intoxicating precursor of CBD that displays potential anti-inflammatory and pain-relieving properties.